Enforced isolation may provide the opportunity for a best trimmed hedge and manicured lawn competition is some neighbourhoods.

But where will the green waste go?

The York Council is scheduled to recommence green bin emptying at the beginning of April. Other Councils have suspended this garden waste system, so it is a little surprising that there has been no announcement from West Offices yet.

Green waste may already be building up.

We did hear from the Council a few days ago that DIY was being “discouraged” if it added waste to the collection streams (the household waste sites have been closed).

One option would be to make a delivery – using perhaps local taxis – of a composting container to any household that wants one. Subject to supply of course. Maybe many would continue to compost even after the current crisis is over. So, a win, win for everyone.

The City needs a “no personal contact” collection and delivery system for prescriptions and food supplies. With many “click and collect” services suspended at local stores there is a gaping hole in the City’s food chain system.

Time to get that fixed, with the Council taking the lead.

In addition many Council staff are now working from home

Although we will continue to report routine issues with local public services over the next few weeks, we don’t expect some to have any priority for the use of resources if the CV virus debilitates the Councils workforce.

Clearly the most important services are those that maintain the safety of the local community.

We’d like to see the Council appoint local coordinators so that the vulnerable have someone to turn to. We recognise that valuable resources like the local “hubs” will have to close but they need to be replaced with technology based alternatives. We look forward to hearing more about the Council’s plans

The Friday Hub at the Foxwood Community Centre has already been suspended.

Hopefully those who are responsible for the graffiti that blights the neighbourhood, those who drop litter and those who allow their dogs to foul footpaths will now change their ways.

NB. The Great British Spring Clean – which relied on volunteer litter pickers – has been postponed until the Autumn.

The Acomb branch of the Community First Credit Union was closed late last year. The property on York Road is now on the market.

The Union says that it still provide a basic service in the City each week. The published opening hours (which may change during the current health crisis) are:

Members can call the Union on 03030300010 when they believe they would like to visit and will confirm if the member of staff will be at these properties.

A few years later, the arrival of the SY Credit Union, at premises in what is the poorest part of the City, was generally welcomed.

The York Council has made no statement about the reduced access arrangements although support services like these are likely to be particularly valued during the present health crisis.

Residents will have a lot of sympathy with local highways inspectors who have the unenviable task of allocation very limited resources to road repairs. Poor weather has increased the number of potholes appearing over recent weeks. The poor state of highway surfaces is a reflection of inadequate investment in maintenance by the York Council for nearly a decade.

An additional pothole filling team is promised to be in place from April. Their arrival can’t come soon enough, at least in west York.

The Councils on line “report it” system now monitors highway defect reports. It is possible to see which reports have been read by officials. Several, reported over the last month, are recorded as “solved”. In reality the problems remain. The potholes have simply been judged not to be deep enough to warrant filling.

That is potentially bad news for cyclists.

Councillors receive very little in the way of monthly performance reports on highways activities, so its impossible to know whether the condition of roads and footpaths is getting worse or improving. The number of reports and complaints received is not routinely published.

Complaints about damage to verges, like parking on footpaths, go largely unmonitored. In summer it is a similar situation with highway obstructions like over grown hedges and weeds.

We hope for better in the future.

The Council will confirm its budget for the forthcoming year at a meeting tomorrow. A tax increase of nearly 4 % is likely with only the two Tory Councillors favouring a slightly lower hike (3.5%).

Most of the tax increase will be spent on the care of the elderly.

More controversially there is a big increase in the “capital” programme which will involve borrowing more money. 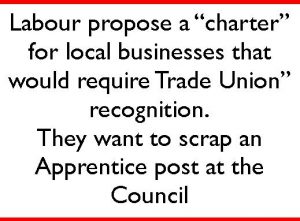 Most attention at the meeting will focus on the alternative proposed by the Labour opposition. They support the planned tax increase.

As always, opposition parties enjoy the luxury of proposing polices that they won’t have to implement. So, Labour roll out again the ban on “non-essential car journeys” within the City Walls.

Packaged within their plan is £40,000 for “early evening family friendly activities in the city centre”, £30,000 for a good employer charter (including “union recognition”),  £70,000 “for substance misuse” (they probably mean reducing the problem), £75,000 for the one year funding of a  “Children’s Commissioner” and £50,000 for anti-fly tipping CCTV cameras.

Cuts would be made by reducing the (recently established) graffiti removal service, crime prevention (safer communities) work An apprenticeship post would be deleted and £100,000 spent on developing a “voluntary” tourist tax.

They want to scrap the £270,000 scheme to modernise 29 Castlegate (but don’t say what they would do with the empty property or indeed with the other half dozen or so unused properties that the Council owns in the City).

Their “big idea” is the reversal of the inflation linked 2.5% increase in crematorium charges, although they routinely increased the charges when they were last in power. 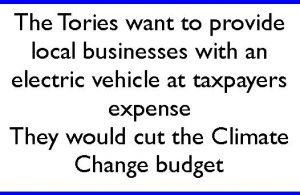 The Tory amendment is doomed as they only two of the 47 members.

But they gamely try the populist route with promises to collect dead Christmas trees, improve bus services and freeze car parking charges. Members pay would be reduced as would the number of scrutiny committees. £100,000 would be lopped from the Climate Change programme while York businesses would get the “free use” of an electric vehicle for 2 months, at a cost to taxpayers of £50,000.

5 staff would be sacked as would one executive member.

If the opposition parties had been serious about their proposals, then they could have been fed into the process before public scrutiny of the options took place.

River levels are rapidly returning to normal levels now with streets like Skeldergate reopening to traffic.

Following on from yesterday’s revelation that the Council is abandoning its garden care scheme for vulnerable tenants, a Councillor has claimed that contractors were charging “£80” to cut a lawn.

Apparently it was this that led to the announcement that the most disabled tenants would instead be offered £200 as compensation for the loss of the service.

Lawns are cut 10 times a year so how far the £200 will go remains to be seen. In addition hedges are normally trimmed on three occasions.

It appears that options like tendering for the service in smaller packages (to minimise unnecessary travel) have not been considered nor has the employment of Council staff to undertake the work. (there are numerous other jobs that such staff could usefully do in the winter period).

The Councillor responsible for housing+ (Denise Craghill) has now tweeted “Nobody who needs support will be left without it. Contract was a hugely inefficient use of public money. Budget still same to improve support for tenants to enjoy their gardens. Everyone is being visited. Those conversations will feed into a decision session in April”.

This doesn’t explain how letters came to be sent to tenants ahead of any decision being taken.

Cllr Nigel Ayre claims on “twitter” that the “communications issue is unfortunate but errors happen “.

We think that the Council should abandon its planned changes for this year.

They should undertake a full and informed consultation on the future of the service and then implement any changes during the 2021/22 financial year.

The Library is due to get a further makeover and extension in 2021 as part of the Councils modernisation programme.

Nearby the first of the new houses on the Acomb Bowling Green site on Front Street are nearing completion.

Hopefully completion of the development will allow for a more comprehensive plan for the use of the remaining land to be considered.

The land was purchased by the Council to facilitate an extension to the library in 2009. However successive Council leaders have chosen to allow the area to become increasingly derelict during the intervening period.

Nice day for a walk or cycle ride today. Higher temperatures then we are used to in January. Some problems with cycling infrastructure reported