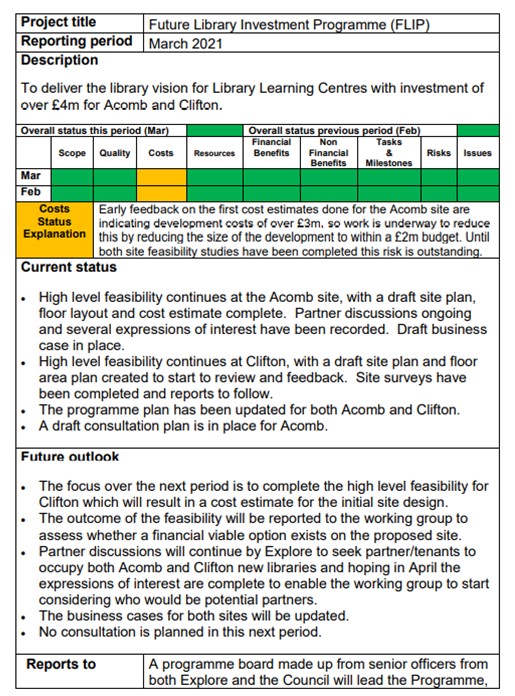 The development to the rear of the Acomb Library (Bowling Lane) is almost complete with most of the homes now occupied.

The Council owned site, currently being used as a builders yard, will shortly close opening the way for a start to be made on the long awaited upgrade to the Acomb Library.

The Council has a budget of £2 million allocated in each of the next two years (starting on 1/4/21) to provide “Centres of Learning and Opportunity for all” at Acomb & Clifton libraries.

Plans to provide a “one stop shop” for public services at Acomb Explore date back over a decade and the land to the rear of South View Terrace was purchased by the Council (from a local builder) with the intention of improving the whole area.

Sadly, that intention stalled, and the land became overgrown.  It was a major missed regeneration opportunity.

The “Lockdown” period has provided Council officials with adequate time to refined their proposals for the site and we expect to see public consultation starting shortly.

We do not want building activity in the area to continue for longer than is essential, so some drive and enthusiasm is now required.

The publication of a draft development timetable would be a good start.

The Council will be discussing another report on the future of library buildings in York next week.  There is little new in the document.

We have seen a decade of agonising about the service which has been run for several years by an independent – not for profit – social interest organisation. They recently won the right to run the library service for a further 15 years.

Whether staff moral has held up in the face of Council indecisiveness in recent years may be open to question.

Compared to other areas, York has a relative successful library service. It has not slipped into the “basket case” situation seen recently with several other public services in the City.

Usage levels have been stable, no libraries have been closed, new libraries have been established at Burnholme, New Earswick and the soon to be opened (probably) Community Stadium. The Reading Café in Rowntree park is successful and an overhaul of the Central Library and Archives has been completed.

The library service has recognised that it needs to be more than a book lending service. Some have styled themselves as learning or “explore” centres. Some have opened cafes. Several have established “Friends of” groups.

But progress in west York has been slow.

In 2008 the Council identified the need to expand the Acomb Library. It had had a modest extension to the front, but other parts of the building were aging. The Council decided to acquire land to the rear to facilitate expansion. The idea was that a “one stop shop” should be established with staff moving in from the then nearby “Acomb Office”. Officials were told to buy the bowling club land but failed to push a deal though. The bowling club was latter to be sold to a private housing developer. The Council land is now part of a building compound.

The expansion plans were jettisoned by a new administration when it took office in 2011.

Since then the staff from the Acomb (housing) Office have been centralised into West Offices. There has been no significant investment in the library building. The acquired land became an overgrown eyesore.

About two years ago an opportunity arose to rationalise the site by  incorporating the library, bowling club and extension land into one redevelopment plan.

The Council failed to act. As a result, expansion options have been compromised.

The latest report confirms a £4 million budget for improvements to the libraries in Acomb and Clifton. This was first announced 4 months ago. The report says that the use of this investment is aimed at “reducing running costs”.

It will be mid 2021 at the earliest before residents will see any building work taking place at the Acomb Explore site.

The report confirms that “the 15-year Library Contract sets out the requirement for Explore (the operators) to co-locate all the Gateway libraries by 31 March 2027”.

This could have significant implications for smaller libraries such as that at Dringhouses.