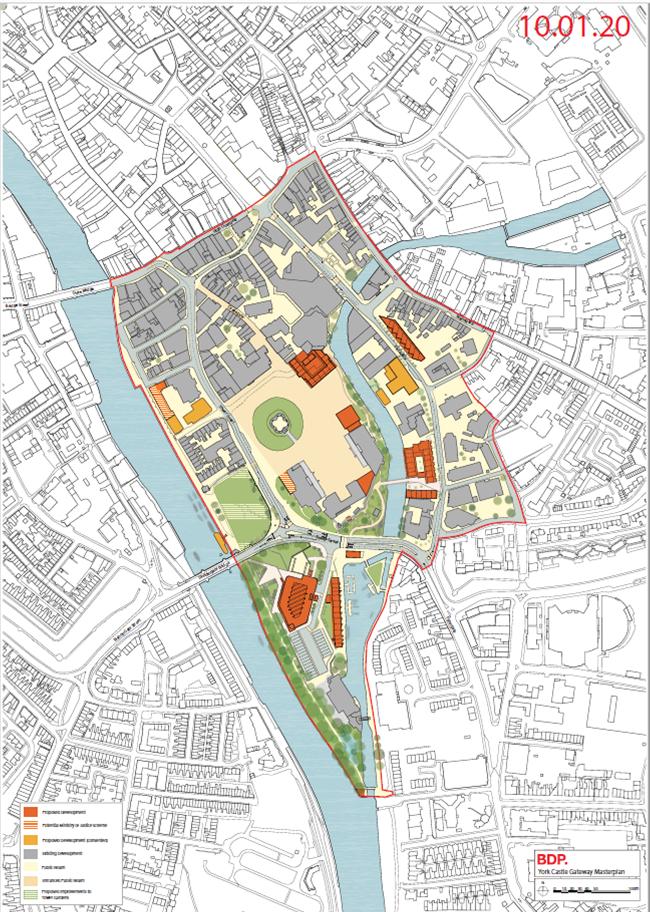 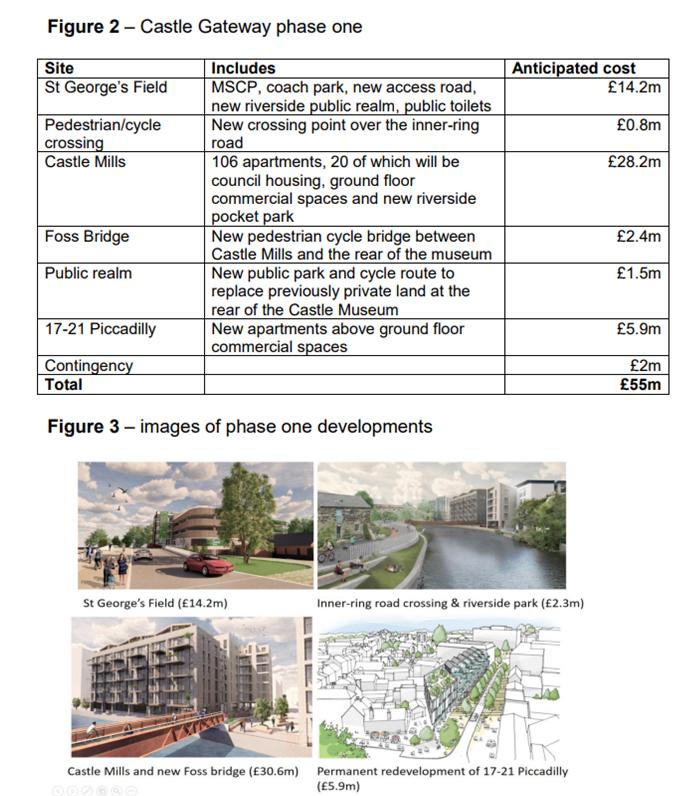 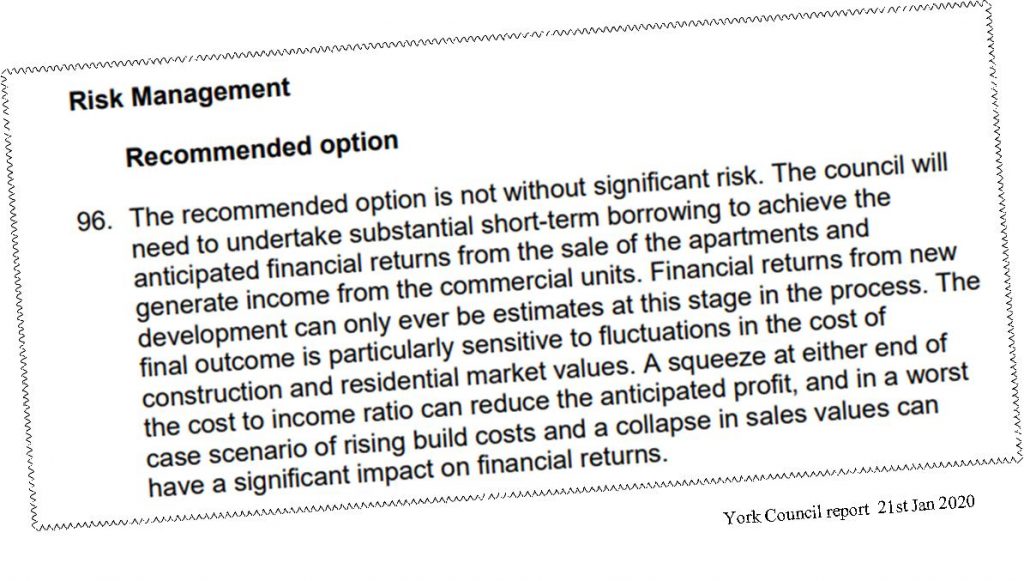 Plans for the new St George’s Field multi-storey car park and coach park have been submitted and are available for viewing and comments as part of the next steps in the Castle Gateway project.

The submission of the planning application for St George’s Field is a major milestone in the delivery of the regeneration of the Castle Gateway. Once complete, the new car park will allow for the permanent closure of Castle Car Park, to create an expanse of new high quality public space for the city.

The relocation of the car parking would also remove a significant number of car journeys from inside the inner ring road, helping residents and visitors get around more sustainably in this part of city.

The planning application has been developed through a range of in depth public engagement events that took place throughout the spring and summer to explore the design options for the multi-storey car park and public spaces..

The new, modern four-storey car park would provide 372 large car parking spaces over 5 levels, with the fifth level of parking situated on the roof. 15 % of the parking spaces will be for electric vehicle charging with the ability to increase these as demand grows.

City of York Council have worked closely with the Environment Agency and  Historic England, to ensure the proposed plans have minimal impact on the functioning floodplain and surrounding heritage, creating high quality architectural design. Vehicle and pedestrian access at first floor level of the car park means it would continue to be in use even when the River Ouse is in flood.

After the planning application has been validated by the council’s planning team in the coming days, it will be available to view at www.york.gov.uk/planning under reference number 19/02063/FULM

Further information can be found on the My Castle Gateway project at www.york.gov.uk/CastleGateway

The new car park would be funded through a new residential development on the site of the now demolished Castle Mills Car Park. As part of the plans a new public bridge spanning the River Foss would connect Piccadilly and the rear of the Castle Museum, opening up a planned cycle and pedestrian route along the river into town.

The planning application for the residential development on the site of the Castle Mills building, providing new riverside apartments for sale, council housing and a pedestrian/cycle bridge across the Foss can be expected later in October.

“The planning application for St George’s Field Car Park marks a key stage in the Castle Gateway regeneration. The Castle Gateway area offers a great opportunity to put family-friendly public spaces, better transport links and places for York businesses at the heart of the city.

“The design of St George’s Field car park is built on extensive public engagement, bringing together the diverse range of opinions on an important part of our city. The application is now open for comments, so please take a look and participate in this important process.”

The proposed building includes living walls, a feature external staircase, and solar panels. New government regulations that have been introduced since the plans were last shared with the public have restricted the use of timber cladding on car parks, so the plans propose an  alternative natural and sustainable material to achieve the same effect alongside the green ‘living’ wall.

This is the first phase of the Castle Gateway masterplan, with planning applications due to be submitted in late spring of this year.

The proposed developments are the vital first stages to deliver the centrepiece of the vision for Castle Gateway – a new public space around Clifford’s Tower and the Eye of York.  The four-storey car park at St George’s Field is needed to replace the parking places which would be lost on the current Castle Car Park, and would be funded through the new residential apartment developments on the site of the now demolished Castle Mills Car Park.

As part of the plans a new public bridge spanning the River Foss would connect Piccadilly and the rear of the Castle Museum, opening up planned cycle and pedestrian route along the river into town.

The drop-in events at Spark:York feature an exhibition of the proposals and the opportunity to talk to the team about the plans. There is also the chance to take guided walks of the area to explore the developments on location:

Come along to a drop-in session or join the conversation on twitter @MyCastlGateway , www.facebook.com/MyCastleGateway  or at www.mycastlegateway.org 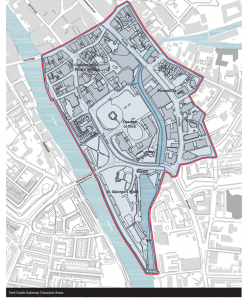 After a delay of 18 years, the Council are to make another attempt to get planning permission for a redevelopment of the Castle/Piccadilly area (Castle Gateway).

It is long overdue.

The City centre has changed a lot since the last planning application failed at a public Inquiry.

Two decades ago it seemed that the City centre economy would continue to depend on the retail sector to provide its main attraction. There were hopes that “anchor” large stores provided in the Piccadilly area would sustain the retail economy in the face of competition from out of town stores and the, then just emerging, trend to shop “on line”.

But that option has all but disappeared. Larger shops in the City centre are finding conditions difficult with the once premier destination – Coney Street – now containing several long term empty units.

The Council has therefore rightly published plans for the Castle area which do not relay principally on retail development.

Instead, yesterday, a much-leaked report majors on City centre living space, a possible Castle Museum extension and some independent shopping units.  There is no place for the hoped-for airspeed museum which could have occupied the ground floor of the 17/21 Piccadilly possibly as part of a restaurant use – a possible missed opportunity given the need to stimulate visits to the Elvington airfield museum.

The Castle car park will close with the design team saying that the resultant green space will provide an entertainment space for 365 days a year (revealing a touchingly optimistic view of climate change). 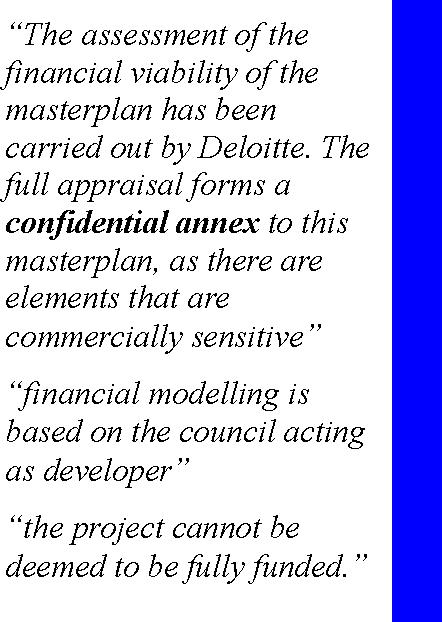 There may be a similar level of wishful thinking in proposing to build apartments and a £10 million multi story car park with 400 spaces on the flood plain on St Georges field, although the plans to allow public swimming in the Foss Basin may provide a prescient transport option for occupants when water levels are high.

The officers report says, “any funding gap in delivering the full ambition of the masterplan can be responded to through scaling back the proposals, identifying external funding sources, or the council providing capital funding through the budget setting process

The estimated total costs of the project – which are the costs of delivering the entire public realm, infrastructure, and the new MSCP – is £30m. The potential gross surplus income from the council owned residential and commercial development opportunities is £22.5m”.

There are several good ideas in the Council’s published plan which deserve to be developed further. The first step should be to publish a candid impact statement indicating how other City centre businesses will be affected.

The number of public parking spaces available is crucial. The Castle car park is York’s best used despite the surface being badly rutted. It produces over £1.2 million in revenue for the Council. To this should be added an income stream from the Castle Mills car park (recently closed). The Piccadilly car park has been less well used since the advance space availability signs stopped working 4 years ago.

Adequate car parking capacity is vital for the retail economy and visitor attractions (which are open outside park and ride hours). People don’t expect to have to carry heavy luggage or shopping for long distances.  Walking distances are important. The proposed 4 story car park at St Georges field would be a 716 metre walk to the end of Parliament Street. By comparison the distance from Piccadilly is 95 metres, from the Castle car park is 275 metres and from Castle Mills 461 metres.

The is always a danger in publishing idealised artist impressions of new developments. They invariably portray a mature green environment on a sunny summers day. The reality on a wet, November evening may be markedly less attractive.

Otherwise it is a worthy attempt to reconcile wildly differing opinions on a site which is crying out for redevelopment. 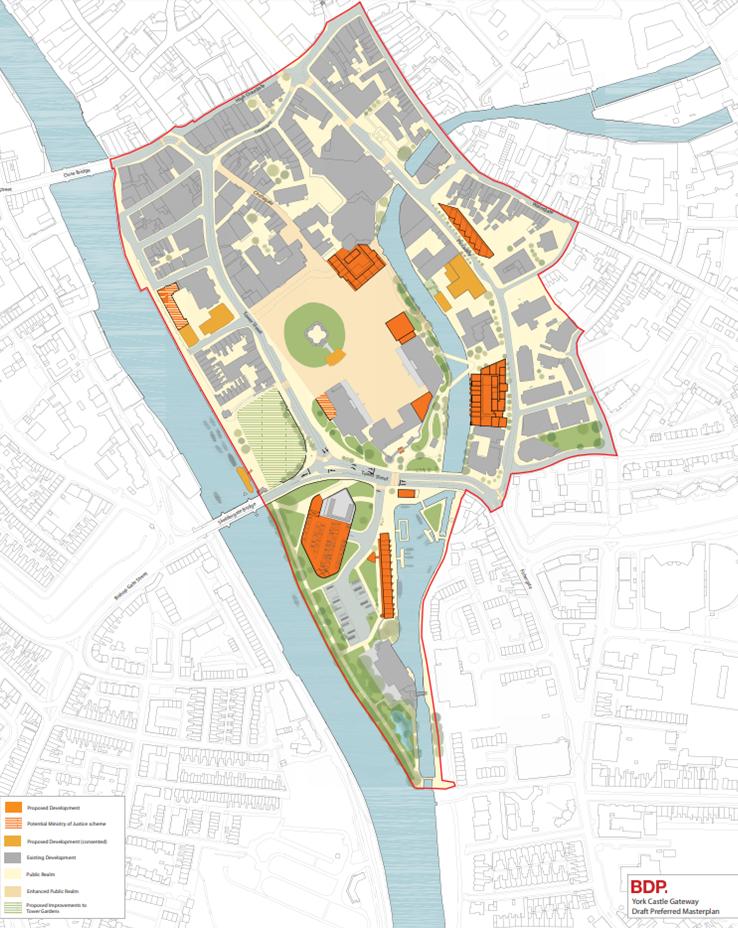 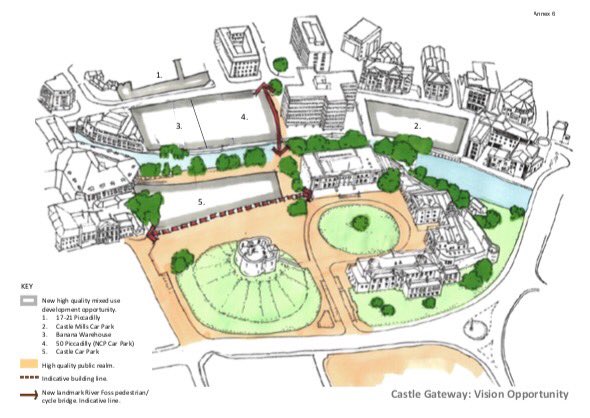 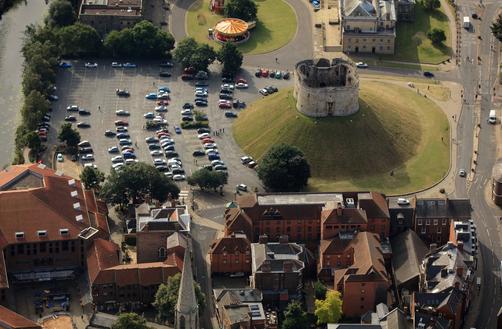