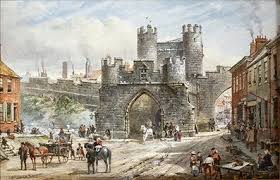 City of York Council is investing over £100,000 to protect and preserve York’s historical Walmgate Bar Walls which date back to the medieval period.

Walmgate Bar is the most complete of the four medieval gateways in York and the walls themselves are the best example of medieval city walls still standing in England today, which over a million people walk across every year.

Originally built as defences, the focus is now on conservation and the council is working with English Heritage to carry out a number of improvements to Walmgate Bar this month to help preserve over 1,900 years of history.

Walmgate Bar is a gatehouse to the city and is the only bar to still have its barbican, portcullis and wooden inner doors.

Works to restore these and other significant parts of the gatehouse will start in December 2014. This will include installation of a unique system which will support the timber-framed extension should either or both columns be struck by a vehicle, repair works to the roof (including restoration of the balustrade) and windows, and re-rendering the timber-framed extension.

Thermal insulation will also be installed.A discreet viewing platform will also be placed on the roof and a hand rail will be installed on the Barbican walkway.The scheme has been discussed with and agreed by English Heritage.

John Oxley, City Archaeologist, said: “Walmgate Bar was struck by a vehicle in 2010 and we’ve had these unattractive supports in place since then, but this restoration work will allow us to remove the supports and at the same time improve the Bar for the tenants and their customers. People will be able to walk on the roof and barbican for the first time in many many years.”

The City Walls are open every day from 8am to dusk. To find out more about the Walls or about the Walmgate Bar project visit:

The first gatehouse in York was built in the mid-twelfth century and the barbican was added in the fourteenth century.

Walmgate Bar was also leased out as a house and in 1376 an annual rent of 10 shillings was paid. People were living there before 1376 and they continued to live there until 1957. Gruesomely, heads were also displayed on this bar and saw the head of Robert Hillyard displayed there in 1469.

This gate was the subject of some of the fiercest attacks during the Siege of York in 1644. The Parliamentarians set up five guns on the nearby Lamel Hill. From here they were able to pound the bar and the Walmgate area.

Walmgate Bar was also mined. A tunnel was built underneath the bar and filled with explosives. This attempt was stopped by the bar’s defenders who dug a separate mine to cut off this tunnel. The city surrendered to the Parliamentarians on 16 July 1644. Walmgate Bar had been badly damaged. Work began on restoring the bar in October 1645. The damage was fully restored until 1648.