The concerns expressed by many York residents, about the amount being spent on foreign visits and travel by both Councillors and officials, are to come under the microscope. 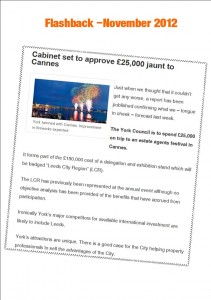 The move comes after Labour lost overall control of the Council.

In the main the initiative is aimed at the payment of travel expenses incurred directly by the York Council but it has been suggested that this will be extended to cover other organisations that the Council has representation on and, in particular, those that receive significant Council grant funding.

Any new process will not put an outright ban on travel.

The move is part of a raft of changes being proposed by opposition Councillors which could transform the way that the York Council does its business.

They aim is to make the Council more open and more sensitive to local residents views.

A key feature would be an end to “behind closed doors” decision making meetings.

The costs of foreign – and indeed UK – travel, have been a cause of criticism ever since Labour took control of the Council in 2011.

Day out in Scotland

Day out in London