The Council have let a contract worth £16,000 to “market” the restaurant unit which it hopes to construct at the Guildhall.

The contract has been awarded to Reesdenton Ltd

The Council had earlier in the year let a £15.4 million contract for building works at the Guildhall  with  VINCI CONSTRUCTION UK LTD.

A new restaurant has recently been announced which will use the adjacent old Post Office building on Lendal. Jamie Oliver’s nearby restaurant has already closed

The total £20 million Guildhall redevelopment scheme has been criticised by residents who are concerned about the long term burden likely to be placed on taxpayers.

Delays in deciding the future of the building have resulted in escalating renovation costs.

Almost comatose leadership has allowed the York Council to slip into a £20.2 million project which will see the Guildhall and neighbouring development site converted into a business club and restaurant.

Neglect of the Listed building since 2012 means that some of the money will be needed to underpin parts of the old building while an new roof will also be necessary.

On even the most optimistic of income estimates, York Council taxpayers will be left with an annual bill of £574,000. Most of this is interest charges on additional borrowings of £16 million.

There have been numerous occasions over the last 8 years where decisive leadership interventions could have reduced the risk to taxpayers. (click)

So now we move on to managing the contract and subsequently letting the newly created space.

The Council has committed itself to a £20 million cost envelope and an opening date in “spring 2021”.

The Councils record on major capital projects has not been good in recent years. The £42 million Community Stadium costs escalated from an original plan to invest £16 million and, 3 years after its target completion date, it is still not open.

Taxpayers will be monitoring progress on the Guildhall project with anxiety. Even after completion the authority will be faced with the task of renting out the new office space for £595,000 per annum. Failure to do so would mean an increased subsidy from taxpayers.

Ironically the Council may then find that it is in competition with itself as some of he office space being built at the Community Stadium site has still not found an occupier. 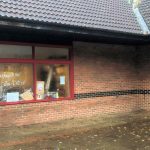 The planning department have confirmed that the new – and now operational –  Buongiorno cafe and restaurant on Acomb Wood Drive has the necessary planning permission. The was confusion  in November when a “change of use” planning application was withdrawn.

It turns out that the Council advised the owner that a “change of use” planning permission was not necessary as the existing take away permission also covered the use of the premises as a cafe.

“Change of use” would only be required if there were proposed alterations to the shop front, display of advertisements, or the installation of any external flues.

We wish the new business every success.