A committee will decide whether to agree to a proposal to provide 8 flats and 2 bungalows on the site of 61A Gale Lane.

While the redevelopment of the site has been on the cards for several years the developers plans have grown over the years.

In 2017 planning permission was granted for 5 apartments plus a pair of bungalows.

A year later and this had grown to 7 apartments plus the bungalows.

The latest revision would see an even larger development.

One of the main areas of objection is likely to be traffic generation with additional vehicle movements adding to those being generated by the adjacent “Lowfield Green” development.

Residents wishing to object to the plans can do so at the planning committee meeting (click) which takes place on Thursday 20th August.

Further objections can be registered through the Councils on line portal https://planningaccess.york.gov.uk/online-applications/ quoting Reference 20/00494/FULM &/or by email to  planning.comments@york.gov.uk

Anyone thinking of going shopping at Monks Cross should beware of the redevelopment work that is going on . The area around Boots is particularly chaotic this week with no accessible bicycle parking and facilities for pedestrians less than ideal.

Hopefully the bosses at Monk Cross will get things sorted out before the IMAX cinema opens in December.

Almost comatose leadership has allowed the York Council to slip into a £20.2 million project which will see the Guildhall and neighbouring development site converted into a business club and restaurant.

Neglect of the Listed building since 2012 means that some of the money will be needed to underpin parts of the old building while an new roof will also be necessary.

On even the most optimistic of income estimates, York Council taxpayers will be left with an annual bill of £574,000. Most of this is interest charges on additional borrowings of £16 million.

There have been numerous occasions over the last 8 years where decisive leadership interventions could have reduced the risk to taxpayers. (click)

So now we move on to managing the contract and subsequently letting the newly created space.

The Council has committed itself to a £20 million cost envelope and an opening date in “spring 2021”.

The Councils record on major capital projects has not been good in recent years. The £42 million Community Stadium costs escalated from an original plan to invest £16 million and, 3 years after its target completion date, it is still not open.

Taxpayers will be monitoring progress on the Guildhall project with anxiety. Even after completion the authority will be faced with the task of renting out the new office space for £595,000 per annum. Failure to do so would mean an increased subsidy from taxpayers.

Ironically the Council may then find that it is in competition with itself as some of he office space being built at the Community Stadium site has still not found an occupier. 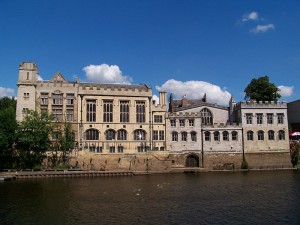 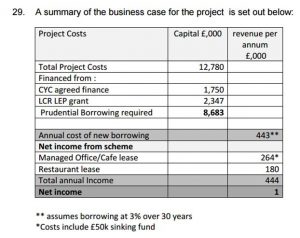 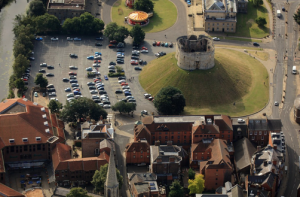 New river walkways and public spaces, new uses for Castle car park, and alternative parking are among the exciting ideas to regenerate Castle Gateway being shared over the next month.

Guided walks across the weekend will introduce the range of ideas to regenerate the huge area of the city ― taking in Piccadilly, Fossgate, Castle, Eye of York and much more – at a special launch event taking place this weekend.

Planners have generated the ideas based on what people said during the first stage of My Castle Gateway, a unique and bold new consultation approach introduced earlier this year. You can also view and feed back all the ideas online at www.york.gov.uk/CastleGatewayIdeas .

City of York Council has joined forces with local engagement experts My Future York to run a series of guided walks, interactive events and online discussions to explore what people want to see and do in the area. 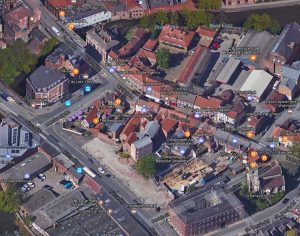 Instead of producing a single masterplan, the Castle Gateway team has created a series of options to allow York’s residents and businesses to keep shaping the future.

However, the consultation process has been criticised for being too ponderous and lacking any sense of urgency. Decisions on the sites are needed urgently to avoid piecemeal development and seize the opportunity to regenerate an area which has been run down for too long.
END_OF_DOCUMENT_TOKEN_TO_BE_REPLACED