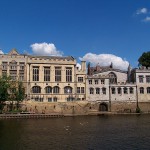 Labour are oppressing ahead with their plan to turn the Guildhall into a “Digital Arts and Media Centre”.

Initially around £400,000 is being spent appointing additional staff to manage the project and to undertake demolition works on parts of the site. In total £1.4 million has been allocated to the project plus an – as yet unspecified – amount of capital investment (likely to be several millions of pounds)

The Council has still not published even an outline business case indicating how such a development could be paid for and sustained.

There is still a large amount of empty commercial property in the City. There are at the moment, for example, 11 starter units unoccupied at the York Eco Business centre at Clifton

The original intention had been to maintain the Guildhall and adjacent heritage buildings as the political and cultural centre of the City. This would have left space at the new West Offices for commercial use.

This has already been eroded.

A commercial use is taking place in part of the building (John Lewis recruitment) while – ironically – another part of the site is being used by the theatre group which is behind the “Arts Barge” project.

The Council has not revealed how much rent it is receiving for these uses or what the ongoing maintenance and other liabilities are for the largely empty site. Earlier in the year the empty building was reported as costing around £13000 a month to sustain

Most seriously it looks like it will be at least a year before a permanent use is found for the buildings.

In the meantime, part of the site has been mothballed prior to demolition while it seems likely that the rest of this key building will be allowed to quietly rot away.