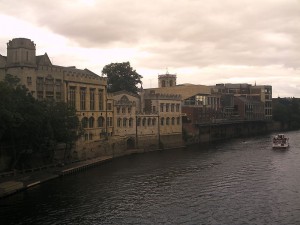 The Council has issued a statement saying that it plans to leave its historic Guildhall home. It seems that Councillors are scrambling to get the best of the new facilities currently being constructed at the £20 million West Office site on Toft Green.

The plan had been to contain costs by continuing to use the existing meeting rooms at the Guildhall, with any spare space at the West Offices being leased to partner organisations such as the Police and Health services. Now it looks like some of this new accommodation is set to be grabbed by Labour Councillors.

The Guildhall is a listed building and has few obvious alternative uses.

Under Labours plan, only the Council Chamber would be retained for civic use and then only on the 6 occasions each year when the full Council meets.

There are 4 smaller meeting rooms at the Guildhall with 2 of the top Directors and their support staff also located there. Since Labour took control of the building, the Leader has acquired 2 support staff while each of the 3 major political Groups also each have a room.

Most of the rest of the building is occupied by staff who service various Council committees as well as some who provide legal advice or who supervise elections.

The Guildhall itself is in frequent use for antique fairs and other social and commercial activities. It is one of the top tourist destinations in the City.

It is unclear to what use the building – which cannot be demolished because of its listed status – could be put. There has been talk for some years for opening up the area to the rear of the Post Office but private investment us unlikely as the configuration of the Guildhall and offices is awkward.

It is unlikely to be practical to convert it into a hotel although some sort of leisure use might be possible. No doubt the Museums Trust could come up with a use while the City has benefited greatly over the years from organisation like the York Conservation Trust who invest heavily to purchase and maintain historic buildings.

The Guildhall is not cheap to maintain or run. However it occupies a prime site and, together with the adjacent Mansion House, it has a unique place in York’s civic history. It’s role and significance should not be underestimated nor should the difficulty of finding a non Council use for the building.

The last thing the City centre needs is for the shutters to go up on this unique part of the City’s fabric. 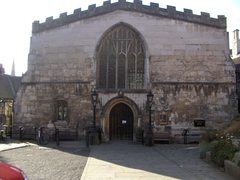 ……………….York Guildhall is located behind the York’s Mansion House and was built in the 15th century, it served as a meeting place for the guilds of York.

Because of damage sustained during an air raid in 1942, the present Guildhall is a rebuilt version of the 15th century building, and was opened by the Queen in 1960. The stone walls, however, escaped total destruction and now form the frame of the reconstructed hall. A single tree trunk was used for each oak pillar, the originals coming from the royal Forest of Galtres. The Inner Room survived the raid intact and has panelled walls, masons’ marks, two hidden stairways and a ceiling decorated with old bosses.

A history of the City of York can be seen within the stained glass window, and within the tracery are men and women who helped to put York on the historical map. The five lights in the tracery depict the different periods of York’s history. Grotesque faces can be seen on the ceiling in the Inner Room.

The Guildhall has served many purposes through its long history, and has even been the scene of many Royal social visits. York Guildhall was the venue for Margaret Clitherow’s trial, Richard III was entertained there in 1483 and Prince Albert, the Prince Consort to Queen Victoria was a guest of honour at a Royal banquet.

The Guildhall was the place where £200,000 was counted before being given to the Scots in payment for their part in helping Oliver Cromwell during the English Civil War.