Despite representations from Liberal Democrat and Independent Councillors at last nights Cabinet meeting, Labour decided to press ahead with their £9.2 million scheme to remodel the Guildhall complex as a “Digital Arts and Media Centre” 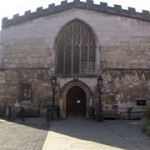 The same meeting considered plans which could see major cuts made to the quality of the environment in the City, reductions in social care regimes,  charges introduced for emptying waste bins and reduced highways maintenance standards.

The new Council leadership’s claim – that they would concentrate available resources  on basic service standards and respond positively to public priorities – now looks rather less than convincing.

The “business as usual” attitude also confirms that the Council has yet to find a governance system which truly reflects the new “balanced” make up of the Council.

The simplest way to get a broader view would be to run all draft reports through the weekly public “urgency” meetings which take place. Reports could the be refined to meet the majority view before going through the formal decision taking process.

Until that happens, it seems that all controversial items will be “called in” for further consideration. This is a laborious process which doesn’t necessary result in a change in the original decision.

Ultimately, if Labour don’t respect the majority view, then a special Council meeting could be called and the Leader of only a few weeks could be kicked out of office.