The Council has published its latest data on air quality in York.

The main contaminant – and potential source of health issues – NO2 is reducing overall. However individual street level figures have not been released nor are up to date figures included on the dedicated air quality web site 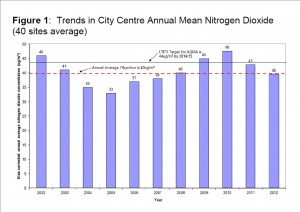 The improvement is put down to the increasing number of low emission vehicles being used on York’s roads.

The Council has been encouraging the transfer to low emission cars since 2003 when parking discounts for small vehicles were introduced (ResPark).

This was followed up in 2010 by the trial use of electric and hybrid buses on some routes in the City.

More recently the coalition government has made funding available for the purchase of “all electric” buses. These will be introduced over the next couple of years.

However the fly in the ointment is the recent change to access arrangements in the City centre. The Lendal Bridge trial is already adding significant amounts of traffic onto routes which already have an air quality issue.

Principle amongst these are Leeman Road and Fulford Road.

While Bootham and Gillygate (traditionally a problem street) have also seen changes.

Even that made no objective assessment of the closure on pollution levels.