York will get seven new green buses and a pilot scheme to convert a diesel bus to electric propulsion. 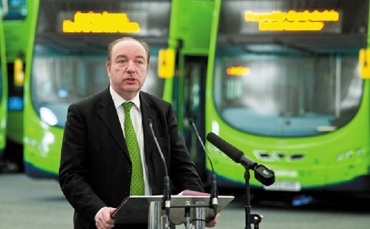 Councils across England are gearing up to roll out a fleet of new low carbon buses and retrofit some of their existing models, after the government handed out fresh funding to reduce air pollution.

York will receive funding for seven green buses and a trial to convert a diesel bus to electric.

Commenting on the fresh funding, Baker said cleaner and more efficient buses benefited both the economy and environment.

“This money will improve air quality in towns and cities across England and cut carbon, which is good for all of us wherever we live,” he said in a statement.

“Schemes like these are a cost-effective way of landing real benefits for the public and the environment.”

Manchester and Sunderland will each receive funding to buy 23 new vehicles that could be electric, hybrid or biomethane gas powered. Meanwhile, the West Midlands, Chiltern District and Swale Borough Council will benefit from new buses fitted with exhaust gas treatment to help reduce particulate matter and nitrogen oxides. Oxfordshire will also get two new green buses.Sheffield will receiving funding to convert five buses to run on natural gas.

This latest funding was taken from an £8m underspend left over after the Department for Transport (DfT) only managed to hand out £12m of the original £20m Green Bus Fund earlier this year. A spokesman for the DfT said it was still considering how to spend the remaining £5.6m.

Meanwhile, Renault’s efforts to develop a new generation of diesel hybrid vans have taken a step forward, after the European Commission gave the green light to €20.5m (£17m) funding from the French government.

The money, which is a mixture of grants and loans, will go towards Renaults’ HYDIVU project that aims to develop a diesel hybrid drivetrain for a low carbon commercial vehicle.

He said the project could potentially lead to “substantial” reductions in fuel consumption and carbon emissions of the near two million commercial vehicles sold each year in Europe.

4 thoughts on “York to get more electric buses”