Ageing and outdated traffic signals at the junction of Hull Road and Osbaldwick Road are set to be replaced next month.

This is part of a scheme to help improve pedestrian access and ease congestion in the area.

The works will include replacing all the ageing traffic signal equipment, widening the traffic islands, resurfacing both the footpaths and road across the junction and parts of the Hull Road approach.

Works will start on Monday 7 September and are estimated to take around ten weeks to complete. The hours of working will be 9.30am – 4.30pm, Monday to Friday and 8am to 4pm Saturdays and Sundays.

In order for the work to be carried out safely, there will be some restrictions, including:

Whilst the works are ongoing the junction will be operating under temporary traffic signals. Motorists are advised to expect delays during this period. We will be managing the network to reduce delays as much as possible.

The new technology being installed will help to manage traffic in the area and enable the new systems to link direct to the council’s Traffic and Control Centre, so that Network Monitoring Officers can manage the flow of traffic better in busy periods.

We were unable to collect household waste from Railway View and Moor Grove in Dringhouses due to blocked access.

We were unable to collect recycling waste from areas of Fulford and Hull Road due to vehicle breakdowns.

We’ll attempt to collect all this waste on Tuesday 9 June. Please present your containers for collection by 7.00am.

We’ve been unable to collect garden waste from areas of Fulford, Naburn, Hull Road and Bishopthorpe.

We’ll attempt to collect missed garden waste from Bishopthorpe on Tuesday 9 June, and the rest on the evening of Monday 8 June, but may not be able to revisit until later in the week. Please leave your green bin out and we’ll get to you as soon as we can.

We haven’t always been fans of those who anat to see grassed areas left to grow “wild”. One motivation has been to help pollinators (bees) but to often they have become eyesores packed with litter and potentially hazardous thorn bushes. One case in point are the long neglected verges in Foss Islands Road.

However there is an example of a planting scheme that has gone well on Hull Road. The roundabout there is a blase of colour this summer.

This is mainly down to the efforts of Cllr Mark Warters who is himself a professional horticulturalist.

“Took many years of increasingly aggressive emails and ridicule to get CYC to stop putting bedding plants in twice a year, neglecting them to the point that they were waist high in weeds and half dead through lack of water to taking on board the idea of clearing it and sowing it down with a flower mix.

Last year was the first year, the tree in the centre was planted this year January time and the whole lot should have been oversown with a permanent wildflower Mix that should take over in time from the annuals.

However given how last year’s annual Mix has sown itself and proved to be very drought resistant, colourful and requiring little if any maintenance – dead stems cut over once in the Winter – it might be worth pursuing on other roundabouts to produce a better feature and save time and money.

We hope that Councillors in other parts of the City will follow this lead. The key clearly is to prepare and maintain beds properly.

Initially at least it is probably as much work as planting bedding plants. But the results are more resilient and – in the case of Hull Road at least – require little on going maintenance.

Anyone expecting the York Council’s Executive to take decisive action, to address declining public service standards at their meeting yesterday, will have been disappointed.

Despite a plea from Independent Councillor Mark Warters that a team be set up to deal with outstanding complaints, the Councils leadership remained tight lipped.

Many residents may conclude that there is something seriously wrong at West Offices.

Not only is there no timetable for addressing outstanding issues, but communications with residents are poor while many local Councillors (not all) fail to roll their sleeves up and tackle issues directly in their wards.

The York Council is no longer a “can do” organisation. It’s become a “maybe things will get better next year” type authority.

That won’t do. Its the kind of complacent attitude that has prompted a rise in more extreme political ideologies elsewhere in the country and abroad. It needs to be reversed, and quickly.

Not everything is bad, of course. Some individual Council officials are making limited progress in improving our streets as we show here.

The Hull Road ward is home to 15,055 residents. Average incomes are lower than the City average. 48% of residents own their home.  32% rent privately and 18% are social tenants. There are 615 Council homes in the area. 0.7% are out of work. Crime levels are below average.  63.6% of residents are satisfied with their local area as a place to live. This is worse than any other ward.  (York average 88.6%).  9.09% believe that they can influence decisions in their local area (City average 26.2%).  Source

This ward has been won consistently by Labour. It now encompasses the University of York campus.

The contest  is given added interest this time round as one of the Labour victors in 2015 has left the party and is standing as an Independent candidate. Hillary Shephard – formerly a Council employee and shop steward – was on the moderate wing of the Labour Party. Hull Road Labour is now hard left dominated  with  some students activists believed to be heavily influential. As with all Independents the hurdle that she faces is to mobilise sufficient help to get leaflets delivered and electors canvassed.

One of the Labour candidates, Michael Pavlovic ,won a by-election in 2017. It was held on the same day as the General Election which was used by many electors to protest to Mrs May about her wasting their time.

Unusually two of the Labour candidates live at the same address in the ward. They say they moved to study in the City as recently as 2013.

The Micklegate ward is home to 12,927 residents. Average incomes are higher than the City average. 51% of residents own their home. 34% rent privately and 13% are social tenants. There are 544 Council homes in the area. 1.4% are out of work. Crime levels are well above average.  90.3% of residents are satisfied with their local area as a place to live. (York average 88.6%).  36.7% believe that they can influence decisions in their local area (City average 26.2%).  Source

Likely to be one of the most interesting contests this year. In 2015 this was the only ward to split 3 ways. 1 Labour, 1 Independent and 1 Green Party Councillors were elected.  Retiring Labour Councillor Dave Merrett plunged to 7th place in the poll with many people pointing to his decision to restrict access to Lendal bridge as the explanation for his drop in popularity.

Independent Councillor Jonny Hayes and the other surprise victor, Lars Kramm (Green), are both quitting after one term of office.  Both did bring a breath of fresh air to an otherwise predictable and tribal Council chamber. Lars Kramm is trying his luck in Copmanthorpe where he now lives.

There will no Independent candidate in the Micklegate Ward this time.

The Greens are fielding Rosie Baker who unsuccessfully contested a by election held in Micklegate in 2017. The victor then, Jonny Crawshaw, returns. He is understood to have ambitions to lead the Council’s Labour Group. He is joined by Sandi Redpath who is another party worker already on M.P.  Rachel Maskell’s payroll.

The fragmented result last time suggests that Micklegate has a sophisticated (or confused) electorate. The ward may once again produce an unexpected result. 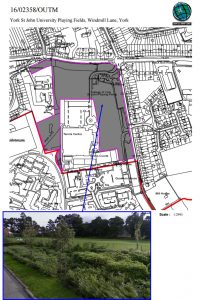 Officials are recommending that playing fields next to the John Lloyd leisure centre on Windmill Lane be built on. There have been numerous objections to the plan which would see 70 houses constructed.

The application includes 1, 2, 3 and 4-bedroom houses and flats, all of which are indicated as being two storey. 30% of all house types would be affordable

The playing fields have been used for many years by St John University.

Three sports pitches are in regular use there by teams not associated with the university. As part of the previous development of the site – to provide the David Lloyd Leisure Centre (2001) – a s106 agreement was signed stating that the playing fields should be made available for a minimum of 16 hours per week.

The immediate surrounding area (Hull Road Ward) has a shortage of public space. In that regard, there are parallels with the Councils rush to build on playing fields at the former Manor and Lowfields school sites on the other side of the City.

In all cases the sites are mentioned in the emerging Local Plan but have not yet been subject to a public examination.

The plans are therefore premature and deny residents the opportunity to state their case to an independent inspector. 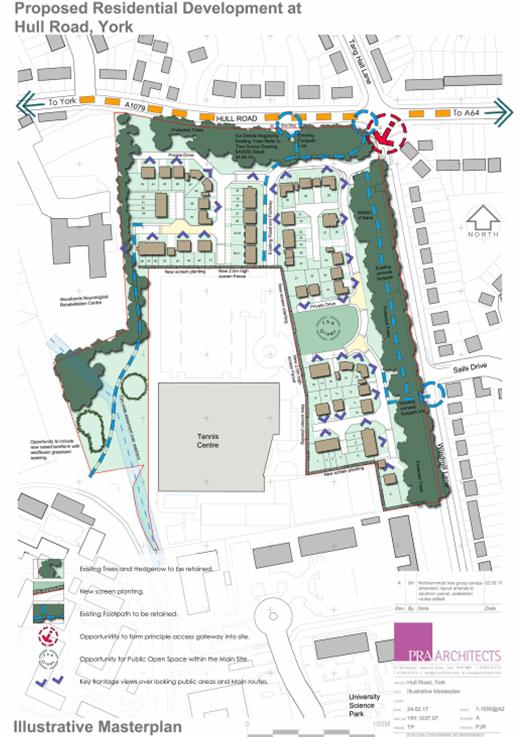 City of York Council is to reconstruct the junction at Hull Road – Melrosegate Junction starting on the 20th October 2014.

The works are programmed to take 1 week to complete, working Monday to Friday between 7:00pm and 11pm.

To carry out the works safely, a road closure at Melrosegate and Green Dykes Lane will be in place near the Hull Road junction preventing traffic from using the junction of Hull Road and these two roads.

Hull Road will remain open under temporary traffic lights from 7:00pm and 11pm Monday to Friday, with some accommodation works taking place outside of these times. 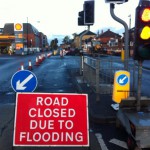 A contraflow system is now in operation at the junction with Melrosegate.

Traffic congestion is bad in some parts of the City including Fulford Road.

There has been no announcement from the council about whether Lendal Bridge will be open to general traffic today.

Click on map below for up to date information on congestion 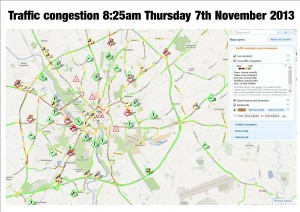