Bus passengers in England are set to benefit from cleaner, greener bus journeys thanks to the 4th round of the Green Bus Fund announced today by LibDem Local Transport Minister Norman Baker. 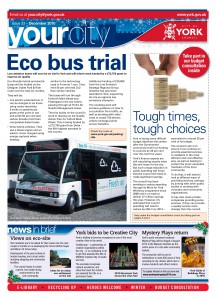 9 low emission buses will be seen around the City as a result of a major grant from the governments Green Bus fund.

They are expected to be powered by electricity.

We understand that one of the vehicles will replace the ubiquitous “Uni bus” plying its trade to the Heslington area, while others will service the new Derwenthorpe development and the new Park and Ride site at Poppleton.

The Labour Councillor responsible for transport said at a Council meeting in March that he didn’t know whether a bid to the Green Bus fund had been submitted.

Fortunately it turns out that local bus operators (TransDev and First) had indeed submitted bids.

The bids are part of a £12 million programme. York does relatively well out of the allocations which are announced today

The Green Bus Fund aims to cut greenhouse gas emission levels and encourage bus operators and local councils to make the switch to more environmentally-friendly buses. In total 4 rounds of the fund, worth £87 million, will have delivered more than 1200 new low carbon buses in England, saving around 28,000 tonnes of CO2 emissions per year.

The government is paying up to half the cost difference between the buses and their standard diesel equivalent.

6 thoughts on “Coalition government to invest £824,000 in “electric” buses for York”