The York Council has shed some light on what they told the Spark developers in the spring of this year.

Copies of Email exchanges have now been published on the “What do they know” web site. Click for details

As early as last April, York council officials knew that the developer was intending not to provide cladding on the external face of the containers. This would have breached planning conditions.

Spark was advised that they had to apply for a variation to the planning permission.

This they subsequently did but the application was refused.

Spark have since said that they will appeal against the refusal.

It also appears that the Council was aware that Spark were borrowing significant sums of money to fund the £500,000 set up costs for the development. It is unclear from the exchange whether the Council’s position as the land owner and preferential creditor was, and remains, fully indemnified. 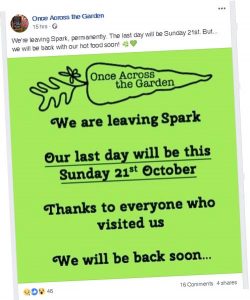 At a meeting held in April, Spark were seeking an extension to the “June 2020 end date” for their lease. They were told that this was not possible, although one official hinted “if the venture is well supported and doing well then they (sic) maybe opportunities”.

Another Spark tenant (“Once across the Garden”) announced this week that they are moving from Spark.

NB. Spark started trading in May 2017 having, by then, been on site for over 6 months.