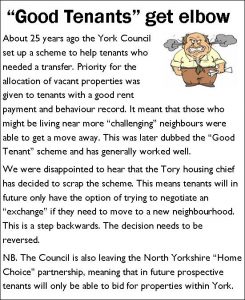 A tough line is being taken on council tenants whose anti-social behaviour has prompted York’s magistrates to close their homes.

The Community Safety Hub – which includes council and North Yorkshire Police officers – has been supported by local residents to help act to stop the pattern of anti-social behaviour at four York council homes.

As part of their tenancy agreement council tenants or their visitors must not act in a way which intimidates or disturbs their neighbours. To do so risks losing their tenancy.

An address at Dale Street, York has been closed up to prevent tenant Scott Berkley (aged 43 of Dale Street, York) from continuing to create nuisance. The court heard of his repeated loud shouting, swearing and verbal abuse of neighbours. Neighbours regularly reported needles discarded in the gardens and were disturbed by multiple visitors to the property every day and at all hours.

During a tenancy of less than two years, Mr Berkley was convicted three times for possession of drugs and on 14 August 2018 at York Magistrates Court he pleaded guilty to burglary and was sentenced to a Community Rehabilitation Order for 12 months and ordered to repay the victim £200.

Scott Berkley has caused serious nuisance to the residents of Dale Street, Nunnery Lane and the surrounding local area. The hub has worked swiftly to prepare this case for court and to secure an order which returns the property to the council and starts the ending of the tenancy.

This should offer peace of mind to the local residents who have been affected by the serious nuisance caused by him and who have supported the council to secure this court order.

On Thursday 16 August 2018, York County Court granted the council possession of the property. The District Judge commented that an outright possession order was the only order that they could grant, due to the serious nature of this case.

An address at Hope Street, York has been closed for a further three months to ensure repeated anti-social behaviour ends. York Magistrates first granted a Premises Closure Order (PCO) on 22 May 2018 because of the actions of tenant George Smith (aged 42 of Hope Street, York)and his visitors.

As the magistrates said: “Neighbours have been frequently disturbed at all hours by people outside the property, in vehicles, and on bikes, and banging on the door. Frequently, visitors appear to be under the influence of drugs when visiting the property for a period of time.”

The three month extension was granted to allow for possession proceedings to conclude and ensures neither he nor anyone other than officials can enter it.

A third property on Rowntree Avenue has been awarded a Premises Closure Order yesterday (21 August 2018). This follows complaints of serious nuisance to neighbours by tenant Annette Moore (aged 44, of Rowntree Avenue) and a violent incident at the property in June this year. The closure notice aims to stop this kind of disruption and allows only the tenant to enter it.

Besides drug use at the property as well as known drug users and local dealers attending the property, loud music, shouting and arguing has been reported since her tenancy began on 7 November 2017.