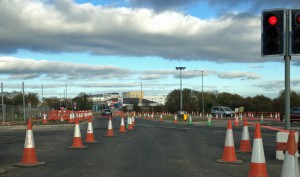 Working in partnership with Balfour Beatty, City of York Council will be carrying out night works for the revised junction at the new Askham Bar Park & Ride site from next week.

A series of night-time closures will be in place from Monday 18 November until Thursday 28 November on the inbound and outbound carriageways along the A1036 from the A64 to Sim Balk Lane.

The carriageway will be closed from 9pm and will be re-opened at 6am. The closures will not take place on the evenings of Saturday 23 November and Sunday 24 November.

Alternative diversion routes will be in place and signed. Access to the Esso Petrol Station will be maintained at all times from the York side of the junction.
END_OF_DOCUMENT_TOKEN_TO_BE_REPLACED

It could be June 2014 before the A59 Park and Ride site near Poppleton opens.

The Tour de France is due to go through the junction on 6th July.

The first main traffic management change has just been brought into operation to enable commencement of the subway construction.

The junction changes at Askham Bar will be completed in December with the main site opening in May 2014.

Both opening dates could be delayed if we have a bad winter.

The York Council wants to permit outdoor entertainments to be staged at the Rawcliffe Park and Ride site.

They are applying to extend the license that currently applies to the adjacent Rawcliffe Country Park.

The application is phrased to give the impression that the car park will be commandeered if the adjacent country park is unsuitable for outdoor events – for example as a result of flooding.

However the requested hours of operation cover the full week and in particular the times when the car park is heavily used for the park and ride service.

The entertainment license would apply between 09:00hours to 2200 hours except Fridays and Saturdays when the hours extend to 2300 hours.

No explanation for the circumstances in which the license would be used have been provided for a committee meeting which is taking place on Thursday 24th October.

The main problems are likely to arise if organisers start setting up during the hours that the car park is normally in heavy use.

NB. A fireworks display and outdoor entertainment event is scheduled to take place at the Rawcliffe Country Park on Sunday 3rd November.

Called “Kaboom” it is advertised as the counties biggest fireworks display. Last year a similar event resulted in extensive damage to the Rawcliffe Country Park because of wet conditions.

Plans to hold the Galtres Festival at Rawcliffe earlier this year were abandoned in favour of a venue near Helmsley.

Working in partnership with the council, First York has successfully operated all five P&R sites for more than 15 years and will continue to do so for another three years.

In addition, one of the city’s principle bus companies has now also been signed-up to operate the new P&R site at Poppleton, which is set to open in 2014. 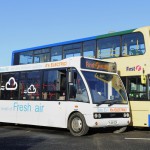 As part of the new agreement First will be operating a new electric bus service from the new 600-vehicle facility at Poppleton Bar, which is set to open in Spring 2014. The purchase of the buses has been part funded through the Coalition Government’s Green Bus fund, which awarded £594k to First in May.

Six electric buses are set to be deployed on the York Park & Ride network, though a bid submitted by First York. The new buses will provide cleaner and greener bus journeys for thousands of passengers across the city.
END_OF_DOCUMENT_TOKEN_TO_BE_REPLACED