1622 complaints were made against the York Council in the 12 months to April 2019. The figures are revealed in a  report published today. They represent an increase from the 1353 recorded in the previous year.

156 complaints were escalated to the final local stage with 6 at least partially upheld.

60 cases were sent on to the Ombudsman who upheld 11 of them. A summary of the Ombudsman’s finding in each case is included at the end of the report In some case modest financial compensation has been paid.

The figures show an increase in complaints about social care.

236 “compliments” were also recorded about the Council and its staff

The York Council came 103rd out of 325 local authorities in the Country for the number of Ombudman’s complaints made against it during the last financial year.

In total 60 complaints had been received.

The Local Government Ombudsman was asked to investigate 57 complaints about the York Council last year.

Transport and planning issues attracted the most complaints.

The equivalent figure for the North Yorkshire County Council was 82 complaints in total, with Adult Social Care and Children’s Services being the most criticised.

The figures are included in the annual report of the Ombudsman

Of the York complaints, 21 were further investigated by the Ombudsman.

The Ombudsman says that the Council complied with their recommendations in all 11 cases although there were delays in 3 instances.

It includes a “public interest” report about the Council’s failure to provide adequate support for a couple with a terminally ill baby.

The Ombudsman’s findings are normally reported to a Council committee for consideration and possible changes to procedures.

City of York Council has apologised after being found at fault by the local Government and Social Care Ombudsman (LGSCO) for not providing appropriate supervision for the parents of a child in its care in hospital and for not responding to their complaint quickly enough.

The council has already fully accepted all the recommendations made by the Ombudsman.

Maxine Squire, Interim Corporate Director for Children, Education and Communities, City of York Council, said: “We are extremely sorry for the distress caused and have apologised unreservedly to the family.

“We fully accept the Ombudsman’s findings and recommendations. We have already taken action to ensure that lessons are learnt from this case and that our procedures are improved.”

The council will make a formal response to the Ombudsman on actions that have been taken after considering a report from the LGSCO at a meeting on 29 November.

The council has already carried out the following recommendations from the Ombudsman:

The authority is currently reviewing the training needs of council officers at all levels in relation to the statutory complaints process and the handling of statutory children’s complaints to ensure that they are being dealt with in line with statutory timescales, as per the Ombudsman’s recommendations.

Copies of the Ombudsman’s report are available from West Offices, Station Rise, YO1 6GA for three weeks from 9 November until 30 November 2018 or from www.lgo.org.uk 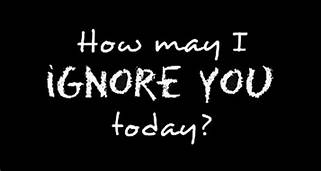 One of the mistakes that some organisations make is believing that ignoring complaints will make issues go away.

That rarely works. Instead the organisations image is dented and the credibility of the management structure is brought into question.

That seems to be happening wit the City of York Council at present.

They have three tier process for handling complaints. If a resident is not satisfied with a response to a first complaint then a second stage can be invoked. This  escalates the issue for consideration by a senior manager.

If this doesn’t work then, in theory at least, you can then escalate the matter to the Chief Executive.

Well you could, if the Council reads your complaint in the first place and acknowledges that they have received it. 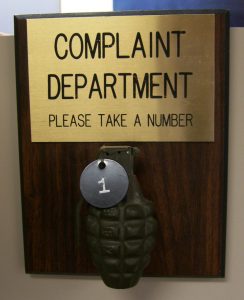 For the last few months that doesn’t seem to have been happening.

Those emailing the complaints team at haveyoursay@york.gov.uk will have been lucky not to have been ignored. Requests for a “delivered” or “read” electronic receipt produce nothing.

The Councils IT department confirms that the Emails are being delivered. The only explanation can be that the complaints section has “downed tools”?

Oh and try the complaints telephone number quoted on the Council’s web site and you will get – you guessed – and answering machine!

There is a similar lack of response on the, recently announced, consultation address for the Low Poppleton Lane bus lane  lowpoppletonlane.trial@york.gov.uk

So the Council risks an adverse Ombudsman enquiry – with all that implies in terms of handling costs – simply because it took the metaphorical “phone off the hook”! 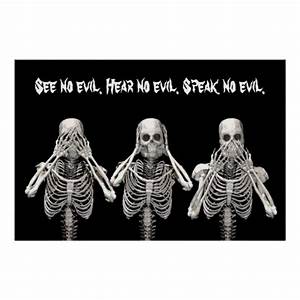 The Local Government Ombudsman has criticised the York Council for failing to publish background documents.

In the watchdogs annual performance letter it says,

“Last year we stressed that serving such notices should only be done exceptionally to avoid giving the appearance of a lack of transparency by the Council. It is, therefore, very disappointing to see this practice has continued this year.

Your Council has issued two section 32(3) confidentiality notices that we considered were not appropriate but the Council, when asked, did not comment on why they had done so. I would urge your Council to address this issue as a matter of urgency as it affects our ability to properly investigate complaints against it.

These instances lead me to have serious concerns about the Council’s commitment to positively address complaints made against it in an open and transparent manner”.

In total the Ombudsman received 56 complaints about the York Council

Eight cases of maladministration, by the Council, were found last year. 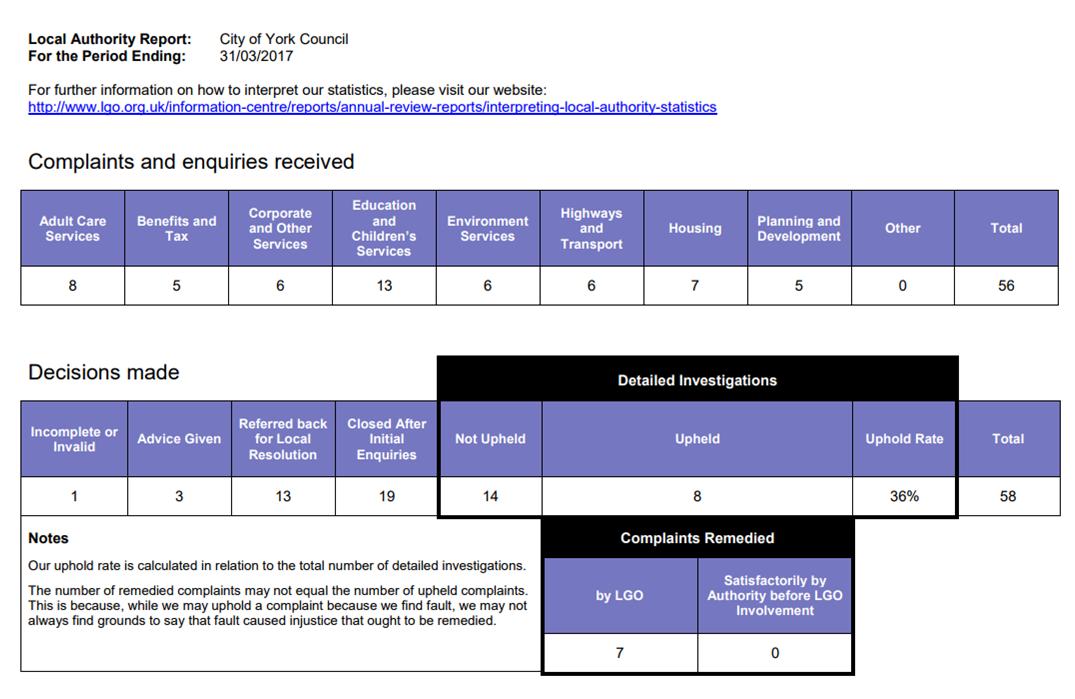 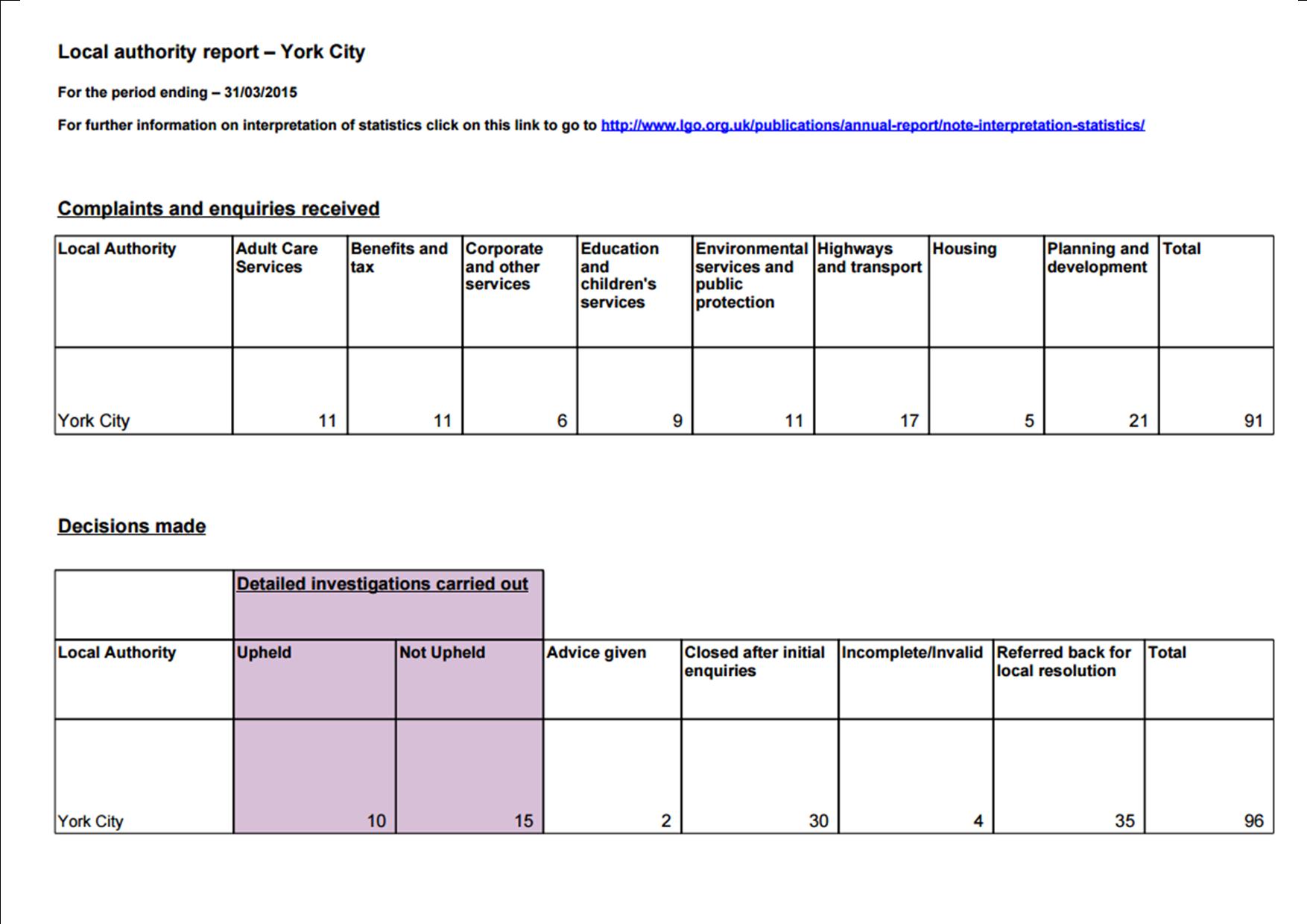 More evidence, that the York Council had become seriously dysfunctional by the end of last year, has been provided in the annual report from the Local Government Ombudsman

The organisation received 91 complaints about the York Council during the year ending March 2015.

Of thes,e 10 were upheld with 35 referred back to the Council for local resolution

The report says that it took “emails, phone calls and finally two threats of a public interest report (sent by special delivery) to see any action taken”.

The complaint related to social care and the York Council, having accepted it was at fault in December 2013, took until October 2014 to remedy the complaint.

The Ombudsman’s letter was sent to the York Council on 18th June 2015 but has not yet been scheduled for cosideration by any of its committees.

There is likely. in the future, to be a single Ombudsman’s office covering all public administration organisations.

Hopefully the new organisation will also have a role in relation to the growing number of Quangos being established in York and elsewhere. Residents, who at least partly fund organisations like “Make it York”, York Museums Trust and York Libraries, need to have a route to independent arbitration if they are unable to get a local resolution for a problem.

Freedom of Information legislation should also apply to those types of organisation.