We collected all household waste as scheduled.

We were unable to collect recycling from parts of Rufforth and Huntington due to vehicle breakdowns.

We were unable to collect recycling from parts of New Earswick, Haxby and Huntington due to vehicle breakdowns.

We’ll return for waste on the evening of Thursday 9 July. Please leave your containers out for collection.

We collected all outstanding recycling waste from Wednesday 8 July.

Been a horrible day for the Council with many more missed bin collections.

Green waste bins weren’t emptied in Haxby, Wigginton and Strensall. The bins not emptied in Woodthorpe on Tuesday still haven’t been collected.

Sources inside the Council point to continuing difficulties in recruiting staff including drivers. There has still not been any statement from the Council leadership about this issue or why replacement vehicles haven’t been introduced into the fleet. 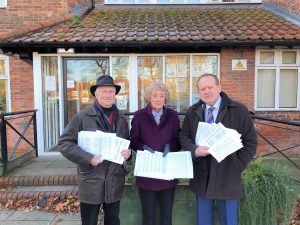 The decision by the Joseph Rowntree Housing Trust to close the New Earswick swimming pool has come under fire.  The Trust announcement yesterday claimed that the pool was losing £130,000 a year and needed £1.3 million spending on building repairs.

The statement came as a surprise with the last published accounts of the Trust (covering 2016) making no reference to the pool or the looming financial crisis.

The accounts do however reveal that the Trust had assets of over £163 million including reserves of £45 million.

The organisation made an operating surplus of £1.9 million last year.

The Trust spent £12 million on salaries last year including £185,000 on the remuneration of its Chief Executive.  Pay increases of 2.6% were agreed for staff last year.

Huntington and New Earswick’s three Liberal Democrat councillors have launched a petition calling on the Joseph Rowntree Housing Trust to reconsider plans to close the swimming pool in New Earswick.

Cllr Keith Orrell said: “The swimming pool’s closure has been announced by the Trust without any consultation with users of the pool or local people, and with no attempt to explore alternative funding options.

“We appreciate that the 1% rent reduction forced on Housing Associations by the Government has put even more pressure on their budgets but we would urge the Trust to work with users and local people to explore ways of maintaining a facility which has served local people for 50 years.”