The York Council has made a small step forward in publishing monthly reliability stats for local bus services.

In the past the authority had been heavily criticised for publishing only the minimum statistics required by central government. This was a “snap shot of services taken in November

Monthly  stats are now available on the iTravel website. Their availability has not been widely publicised. 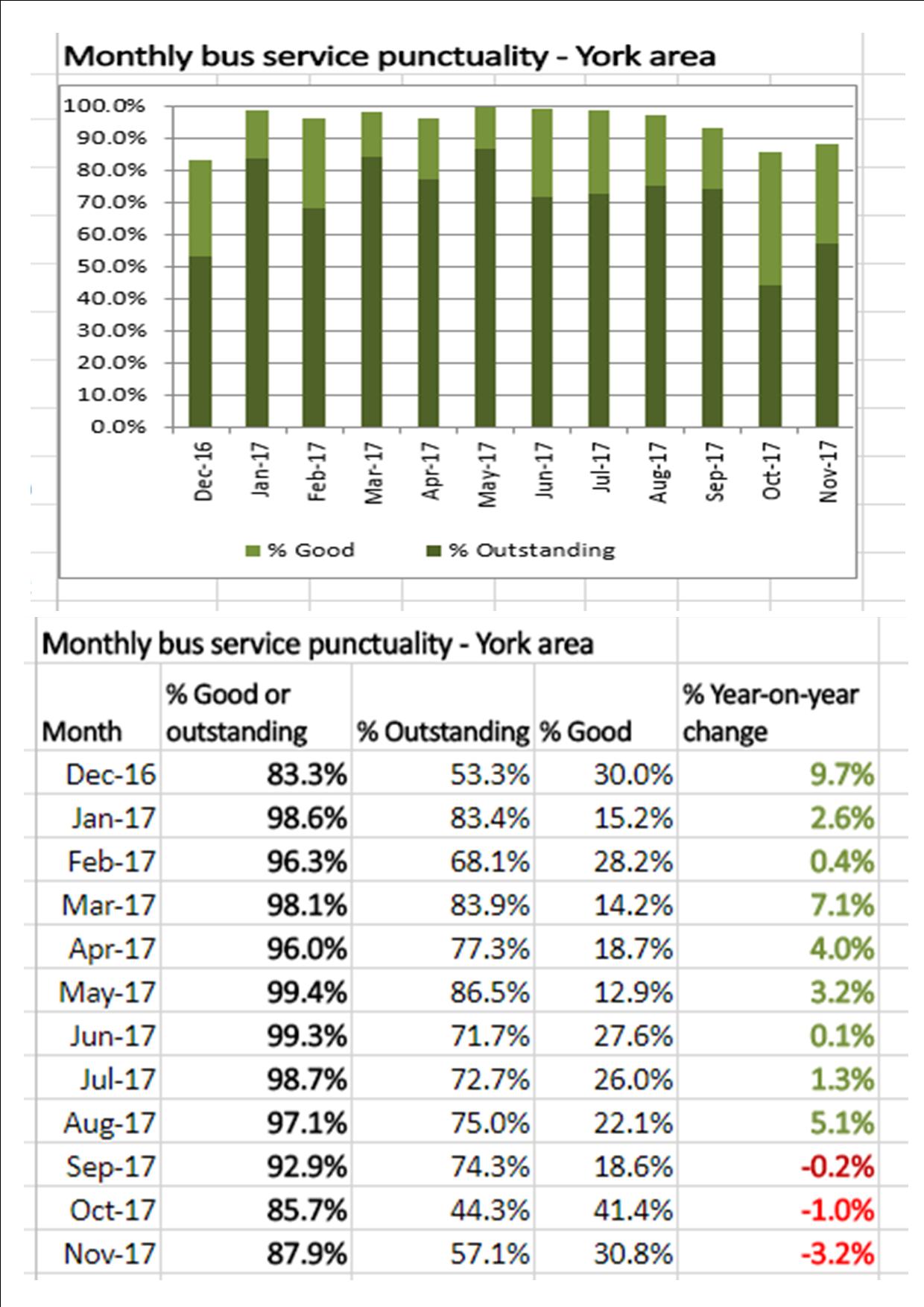 The stats reveal that reliability has generally been good but that it suffered a setback in the Autumn.

We hope that the next step will be for route by route stats to be published.

The Council says that “the published measure is calculated using timings from every bus service in the York area for which real-time information is available. This currently comprises all local bus services operated by Arriva, EYMS, First and Transdev (excluding CitySightseeing).

The measure provides a picture of overall punctuality across all routes in York over the last 12 months”.

he reported punctuality figure for each month consists of the percentage of measure periods during that month where punctuality is:

Bus services in York have generally been improving during the last couple of years. Customer satisfaction surveys, carried out by Councillors in the Westfield Ward earlier in 201,7 found that bus services were the highest rated public service in most neighbourhoods.

That is a major change round  compared to the results of similar surveys conducted 15 years ago. 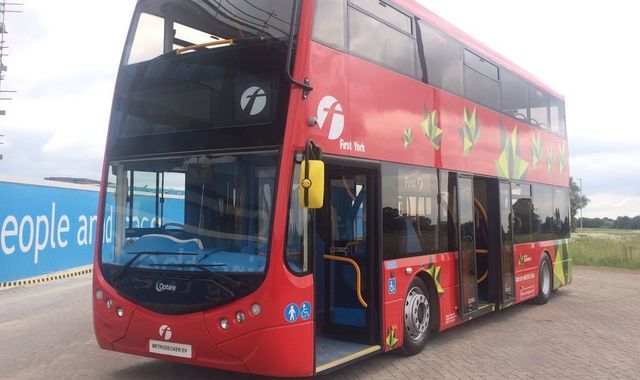 Three weeks after revealing that a new P & R contract has been let the York Council has issued a statement confirming that the current contractor First York will also run the new services.

“The council and First York are set to extend their partnership delivering York’s Park & Ride service after the bus operator successfully bid for the seven year contract commencing in early 2018.

Alongside this the new buses will also have displays providing useful information for passengers including details about the next bus stop, service data and other useful local information.

Overnight parking will also be introduced at the Askham Bar and Monks Cross Park & Ride sites giving visitors the ability to park at the site en-route to their hotel accommodation, or to access the rail network for a journey elsewhere lasting more than one day.
END_OF_DOCUMENT_TOKEN_TO_BE_REPLACED

In the run-up to Christmas, First York are trialling a Sunday service which will take passengers from Foxwood, Woodthorpe and Bishopthorpe, direct to Askham Bar Park & Ride, where they can connect with a direct, frequent buses on Park & Ride service 3 to York City Centre.

The service will also serve stops at Askham Bar Tesco.

The company says that recent changes by City of York Council have meant that residents of Woodthorpe and Bishopthorpe have been without a Sunday bus service. “We’re now launching a free shuttle bus service to Askham Bar Park & Ride to help you travel into York, and enjoy the Christmas shopping opportunities and festivities”.

First York  Managing Director, Marc Bichtemann, comments: “At First York, we’re dedicated to providing our customers with the best service possible. We wanted to ensure that our customers in Bishopthorpe, Woodthorpe and Foxwood who want to travel into York in the run-up to Christmas, have the opportunity to do so. We will therefore be offering a free shuttle bus service to the Askham Bar Park & Ride from this Sunday, and look forward to welcoming our customers on board.”

The service, numbered 500, will run with an electric bus, subject to availability, to reduce noise and emissions. The trial will end on Sunday 18 December. We’ll then assess demand for the service before deciding if it can be extended into 2017. 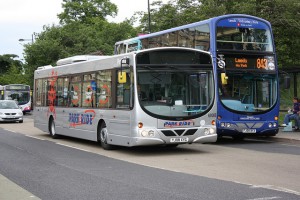 City of York Council opened a tender process for bus operators to bid for a new contract to manage one of the UK’s most successful Park&Ride services in June.

With over four-million passenger journeys each year, the council was confident the tender would attract a number of high profile bids to continue offering the best possible deal for residents and visitors.

There was speculation that the low emission specification for the required buses, combined with a tight financial expectations, have combined to make the contract unattractive to commercial bus operators. At the moment the Council makes around £100,000 a year in revenue surplus from the service. The scale of the service means that the number of bus companies that could tender is restricted to only the largest operators.

The Council now says, “although there was strong interest in the contract, at this stage of the procurement process no responses meeting the council’s financial expectations against the specification tendered were received.

The council is confident that an operator will be secured in the coming months and following dialogue with a number of bus companies, options for addressing the concerns of potential suppliers will be developed. Subject to Executive approval on 13 October, the results of this review will be brought before the council’s Executive in December, prior to the issue of a further invitation to tender.

The council has negotiated a six month extension to the current contract with First York, whose contract expires at the end of January 2017. This will ensure that residents and visitors experience no changes to the Park&Ride and will continue to receive the same level of service until a new operator is in place. 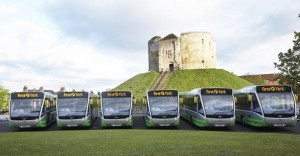 Executive will be asked to approve this extension at a public meeting on13 October.

Councillors will then be asked to determine which elements of the specification they would wish to alter at December’s Executive.  This could include alterations to the frequency of service, type of bus used on the service and fares charged”.

Cllr Ian Gillies, Executive Member for Transport and Planning said: “We’re pleased that this tender received strong interest and we have already approached operators to establish what alterations to the Park&Ride specification might be required to enable them to bid again.

“Whilst it’s disappointing that no compliant responses were received at this stage of the process, we’re confident we will secure a new operator who will work with the authority to provide a service, which will work towards achieving its targets over the length of the contract.”

Executive takes place on Thursday 13 October from 5.30pm and is open to members of the public or is available to watch live online from:www.york.gov.uk/webcasts

To find out more about the report, or to attend, click here

Growth in demand is shown below.

“Free” Park and Ride from some sites on Boxing Day 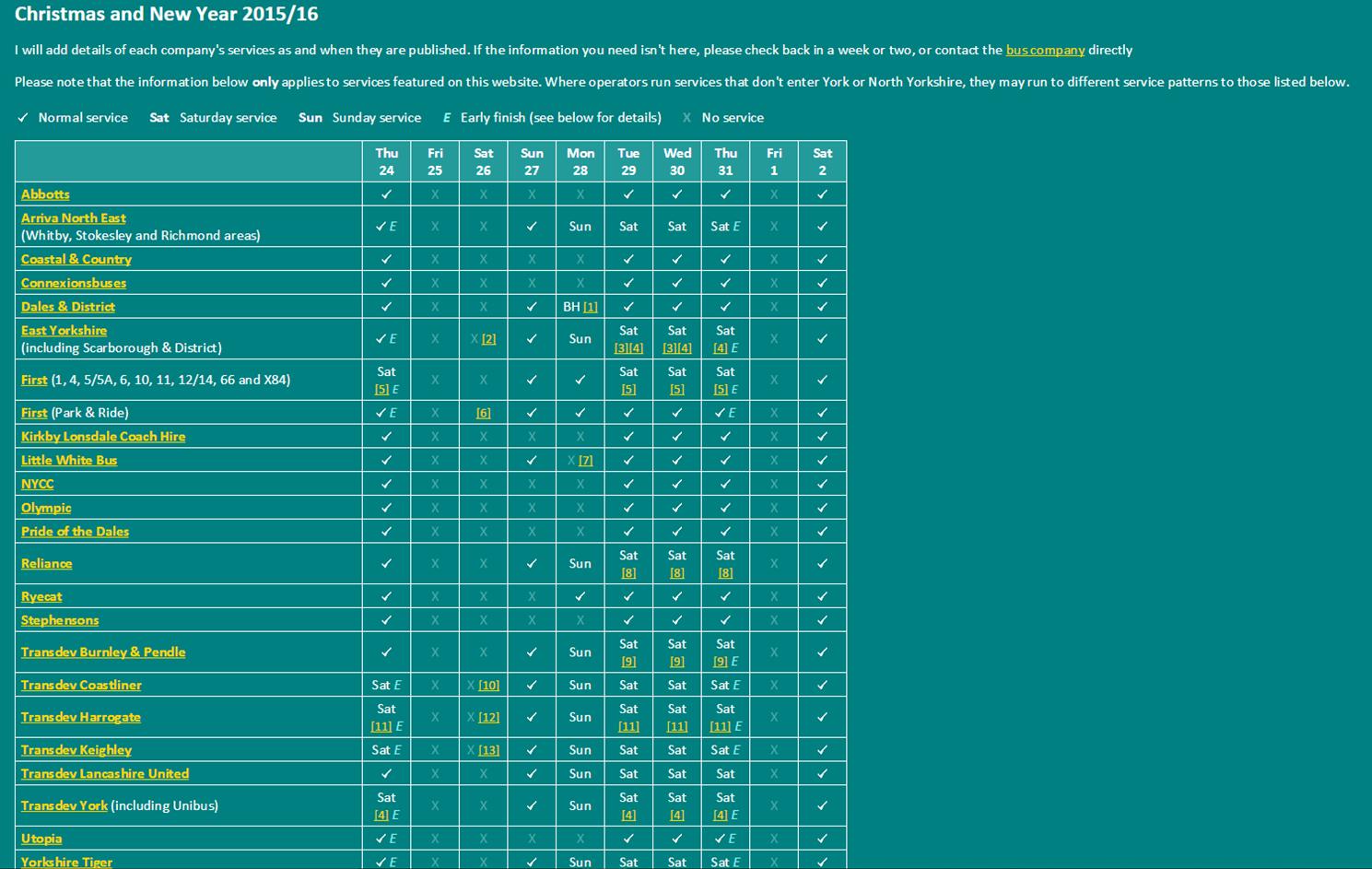 [6] Free buses on 3, 7 and 9 running every 15 minutes, calling at all stops: York Boxing Day timetable