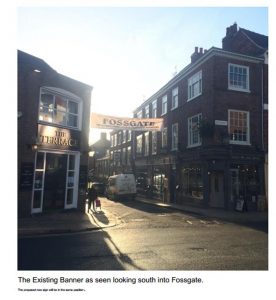 A plan by York Civic Trust, which could have given the Fossgate area a boost, is being opposed by conservation officers at the Council.

The proposal would see the existing fabric banner at the entrance to the street replaced by a purpose designed metal equivalent.

The sign is intended to enhance the profile of a street which was badly affected by the 2015 floods. Now prospering once more and rapidly – with neighbouring Walmgate – becoming the City’s premier dining out location, the expectation was the the unique sign would have been broadly welcomed.

Indeed – unusually for York – there have been no objections to the plan with both conservation bodies and traders united in support of the proposals.

The design of the new sign celebrates the history of the street which contains one of the entrances to the 14th century Merchant Adventurers Hall.  It also reflects the role of the street as a former fish wharf. 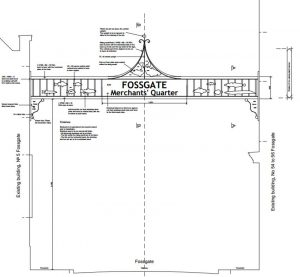 The concern of the planners appears to revolve around the loss of a key streetscape view (although the new banner is in fact less intrusive than the existing signage).

The Council has allocated £500,000 in its budget this year to improve the environment in the street. It is widely expected that the street will be partly pedestrianised with the existing ugly bitmac carriageway being paved over.

The planning departments views represent the latest in a series of awkward positions taken by the Council.

They have approved plans for an ugly visitor centre next to Cliiffords Tower and nodded through a plan for an “arts barge” on a sensitive part of the river bank.

The Planning committee has yet to consider the even more bizarre plan to site shipping containers on Piccadilly, although the Council’s leaders have already endorsed that project.

The Fossgate proposal will be considered by a planning sub committee on 6th April. Background papers can be read by clicking here