A new citywide project which hopes to encourage more communities to play a vital role in finding and preserving orchards in York through a new York Heritage Orchard Group has launched. 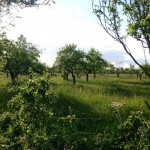 Traditional orchards are wildlife havens which contain elements of woodland, pasture and meadow grassland, and are often bordered by native hedgerows.

They are recognised as representing ‘biodiversity hotspots’ and have been identified as priority habitats through both the national and local Biodiversity Action Plans.

However, statistics from the national charity Peoples Trust for Endangered Species (PTES) has found that around 90 per cent of these habitats have been lost since the 1950s.

In order to help halt this decline and to protect these important habitats, City of York Council is inviting individuals and communities to get in touch if they own or care for an orchard, which they believe may be of heritage interest to help get this new group off the ground.

The group hopes to build on the good work already carried out by PTES which identified over 35,000 individual orchards in England through a national survey and are now relying on local people to gather information about them.

Locally, Edible York launched the York Orchard project last year which has led to over 250 trees being planted and local communities being skilled up to graft new trees and maintain and prune both new and older trees.

Cllr Andrew Waller, Executive Member for the Environment, said: “The York Heritage Orchard Group aims to identify, record and restore York’s ancient fruit trees, working together to help protect York’s flora and fauna for future generations. It will share knowledge and provide important advice and guidance to communities about how to care for ancient fruit trees and in the establishment of new.

“These habitats add to the city’s all important green infrastructure, creating vital green stepping stones for wildlife to move throughout our city,  so we encourage everyone of all ages to get involved if they can.”

Steve Oram, PTES Orchards Biodiversity Officer, said: “We are very pleased to hear about the launch of the new York Heritage Orchard Group.  Sadly, traditional orchards are still being lost, and so it’s really good to see that this initiative will help care for remaining orchards, as well as create new habitat.”

Bill Eve of Edible York and York Orchard, said “Edible York is delighted to try and help anyone in York plant new fruit trees or re-invigorate old ones. It’s great to see a new Orchard group spring into existence to help value and develop the beautiful fruit trees we have within our city already.”

Colin Campbell of Fulford Community Orchard, said “This is a vitally important initiative that hopefully will bring together all those individuals and groups in and around York who have been struggling, some with very little outside support, to preserve and protect these crucial remnants of our horticultural and ecological heritage.”

To find out more about orchards visitwww.york.gov.uk/YorkHeritageOrchardGroup

To find out more about the PTES campaign visit: