Recruiting to the first 19 new Cabinet Office posts based in York will begin this week (17 May).

The news follows an announcement earlier this year that around 200 roles from the Cabinet Office would move to York over the next four years. The Civil Service department is responsible for the execution of a wide range of government policy and employs almost 8,000 people across the UK, 400 of whom are already based in York.

The first phase of recruitment features a wide range of policy and analytical roles, including a Programme Manager and Business Analyst positions. Apprenticeship vacancies in policy and project management will also be offered and candidates will not require any previous civil service experience to apply.

York is world renowned for its heritage and culture, and the Cabinet Office’s decision to re-locate jobs to York, as part of it s wider programme to move civil servants out of London, is a vote of confidence in our city.

“It recognises York’s fantastic geographical and digital connectivity, our highly skilled workforce, high quality housing, schools and quality of life, and our ambition for continued innovation and creativity.

“Including a number of apprenticeships in the first phase of the recruitment highlights not only the part apprenticeships have to play in the city’s skills mix, but will also enable local people to apply for the posts, regardless of previous civil service experience.

“I look forward to seeing what further opportunities for local residents Cabinet Office investment will bring to our city.”

I am pleased we are growing our presence in York as part of our drive to move Civil Service roles out of London.

“These roles provide an exciting opportunity to work on important issues right at the heart of government and I encourage anyone with the experience we are looking for to apply.”

The roles are being advertised on Civil Service Jobs. Those interested in applying for the roles can also access more details on how to apply for civil service roles.

City of York Council has been chosen by the Government as the lead authority for the York area and is inviting bids which will support communities, local businesses, create new jobs and support people into employment.

As a lead authority, the council is responsible for receiving bids, selecting the bids that will be sent to the Government for consideration and paying grants to successful projects as well as managing their performance.

Projects proposals are encouraged from all areas of York and should align with local priorities. Proposals should also align with the programme themes:

The Government has introduced the fund as it prepares for the launch of the UK Shared Prosperity Fund in 2022, which will replace EU Structural and Investment Funds.

Successful Community Renewal Fund bids will be for 2021-22 only and projects must be completed by the end of March 2022.

Applicants should note that York is not classed as one of the Government’s 100 ‘priority places’ across the UK. As such, The City of York Council is particularly interested in project proposals that are ambitious, offering fresh ideas.

The deadline for submitting applications is 16 May. The City of York Council will then produce a shortlist of projects for submission to the Government.

Further information can be found here.

Bosch subsidiary, ETAS Ltd, has reached an agreement with the UK Government to significantly expand the activities of the embedded software centre of excellence in York.

ETAS Ltd, the UK arm of the global software engineering company specialising in solutions to drive the development of embedded systems for the automotive industry, will make a significant investment to expand the centre of excellence. This move represents a vote of confidence in the current climate for the automotive sector.

The newly expanded centre will develop the middleware that will power future generations of advanced autonomous and highly automated driving to be delivered at scale for mass production and allow the world to realise the ambition of accident-free driving. It will also help deliver on the Government’s net zero and levelling up ambitions by securing highly skilled technology jobs in the North of England.

ETAS Ltd has doubled in size in the last five years and today’s announcement will help to further strengthen the automotive cluster in the region.

The current York location has been part of ETAS Ltd since 2003 and is currently responsible for the development of real-time operating systems and basic software for the automotive industry. To date more than 1 billion copies of the ETAS York operating system have been deployed and are driving on the roads globally.

The council has been leading the way with its Smart Transport initiatives since 2018 with the Eboracum Research Project. Traffic signal plans where automatically updated using live on-board vehicle journey times and the findings where warmly received by the transport industry.

The work continues with the Smart Transport Evolution Programme which began in September 2019 and has so far welcomed a real-time city-wide traffic model which uses many live data feeds to forecast 5-60 minutes ahead and produce alerts for traffic control operatives or drivers.

The programme will shortly be delivering Green Light Optimal Speed Advisory, a service that sends real-time and future traffic signals conditions into smart phones and cars and advice of the most efficient speed to travel safely to get through on green.

All this has been made possible by upgrades to the City’s smart infrastructure and puts York in a great place for the adoption of Connected and Autonomous Vehicles.

The Councils planning committee have rejected plans to establish a Roman visitor attraction on the lower floor of a block of flats on Rougier Street. The building would have replaced the (rather less than iconic) “Northern House” 60’s office block.

Opponents of the scheme cited the building’s size and the lack of affordable housing units to justify their decision.

The developers now have the options of appealing against the decision, submitting fresh plans or walking away from the City.

The latest Centre for Cities report gives some hope for York as the City ponders what the post pandemic world might bring for it.

York has a well educated workforce with low pollution levels.

Exam results are the best of any City nationwide.

The City has a relatively low claimant count.

On the other hand a surprisingly low percent of businesses are connected to high speed data networks and many existing jobs are in the public sector.

You can access the full report by clicking here

A report on how York is fairing during the pandemic paints a mixed picture.

Unemployment numbers have soared to over 5000 with the highest percentage to be found in the Westfield ward where 540 (6.1%) are now out of work. 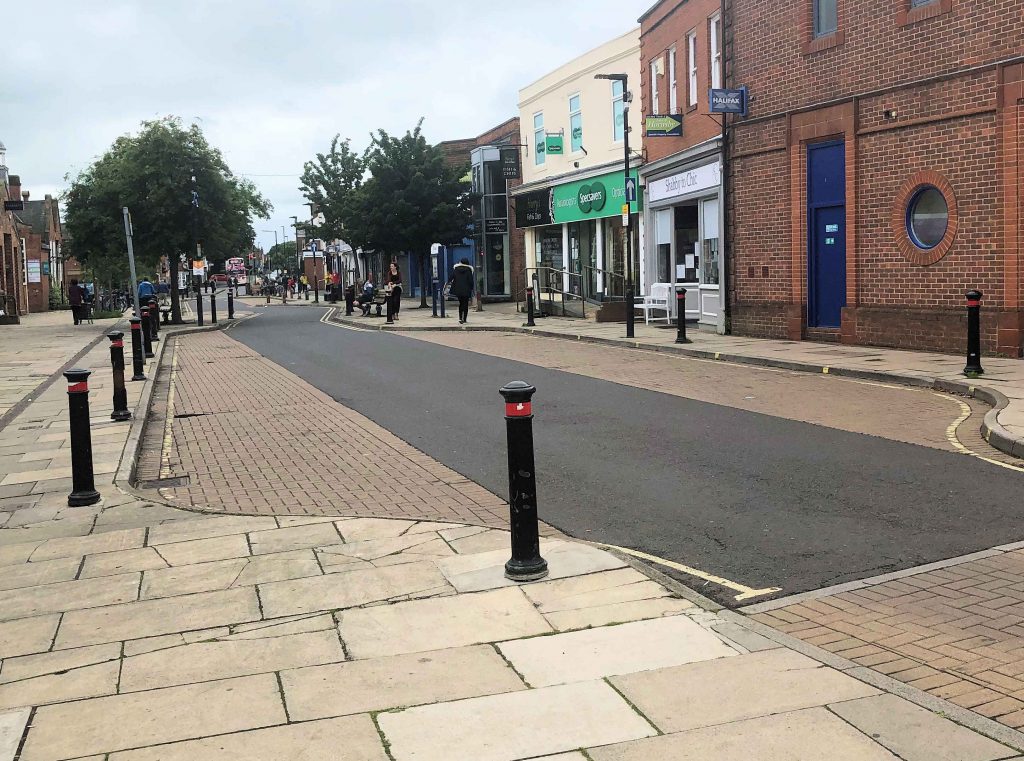 Perhaps not surprisingly, this has led to several attempts to establish new businesses in the area

There is a major disappointment for the Front Street area where the much-anticipated economic regeneration review has been delayed again. The recent lockdown is blamed.

It seems that the proposals aimed at revitalising the area will not now be available until next summer.

It is another reverse for the economically poorest part of the City, which has seen many formal and informal leisure facilities close in recent years. 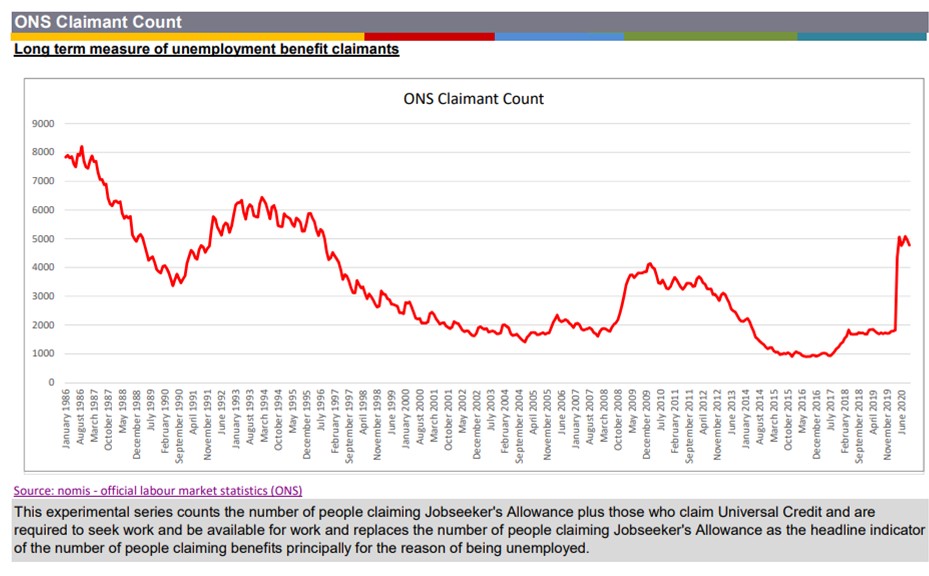 It looks like the popular Peacocks store on Front Street will shortly be closing.

Peacocks is part of a group which includes The Edinburgh Woollen Mill and Jaeger. It was reported last week that the group was in financial difficulties.

So far, shops in the Front Street area have generally managed to survive quite well the pandemic restrictions, with one long term empty property, near Morrisons, set to reopen shortly.

There was, however, some criticism of the authorities when it was revealed recently that a consultant, appointed to report on the remodelling and future marketing of the area nearly 12 months ago, had not yet started work.

A suggestion that, for one or two days each week, the pedestrian restrictions should be eased to allow vehicular access for disabled shoppers, was also ignored.

Despite growing COVID restrictions and the return to school, parts of central York were still fairly busy today.

The Food Festival has started and the first scooter being ridden in the pedestrian area was spotted.

A report which looks at how the York economy has fared since the pandemic started has been published today. It looks mainly at the City centre although it markedly fails to reveal traffic levels on, and within, the inner ring road.

Instead it highlights trends on major trunk routes. Generally, these reveal that traffic levels have risen to about 90% of the levels seen in February (which itself is normally the quietest month of the year in the City)

This bears out the conclusion in the report that visitors from outside the City have been coming in large numbers and they mostly drive to City centre car parks.

Park and Ride numbers have slumped  along with public transport passengers more generally. Both are down to 30% of the numbers seen in February. Clearly COVID fears account for this change in transport preferences.

The figures provided also don’t provide any information on the numbers using two wheeled transport. Given the clamour for more cycle lanes, that is surprising. Elsewhere in the country the numbers cycling are up slightly (but not when it is raining!).

There may be a lack of data available to the Council on transport patterns.

They admit that only 2 of the “footfall” cameras are currently working and that a replacement system has yet to be implemented.  The available data suggests that footfall is around 20% down on the equivalent period last year.  The report claims though that spend per head is comparable to last summer.

The numbers claiming out of work benefits has trebled. It may get worse when the “furlough” scheme comes to an end. More stats can be viewed by clicking here

The Council says that it is setting up a “board “ to supervise training initiatives which will counter increasing unemployment.

It is right to focus on education as this will pave the future for the City. It is, however, unlikely that a 20 member committee will be sufficiently agile to make much difference.

The Council approach is likely to be criticised for overly focusing on the City centre. Out of town shopping destinations like those along the ring road don’t get a mention and even local centres at Bishopthorpe Road, Front Street and Haxby merit only a passing review. No footfall figures are provided nor are empty commercial priority trends analysed.  In the case of Front Street a promised economic review by a consultant was shelved during the lockdown.

10% of retail units in the City are now empty.

Pleasant weather brought out the crowds in York today. The numbers in the City centre were comparable to a normal bank holiday. Parts of the market were particularly busy with long queues at several food outlets.