Good weather in York has encouraged walkers and cyclists to take advantage of local open spaces.

The Knavesmire has been popular with walkers while the Millennium Bridge and Rowntree park were very busy today.

Most of the leaves are off the trees now. A lot of clearing up still to do in some areas 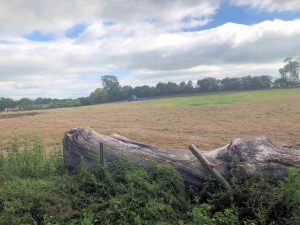 The paradox is revealed in the latest set of performance indicators published by the Council. They outturn figures for the last there financial years.

Another perhaps significant finding is that only 31% of the members of a residents “talkabout” panel “speak positively about the Council”; 28% speak “negatively”.

However, 52% agreed that the Council treated them “fairly and with respect”.

The figures predate most of the lockdown period.

Highways England removed the carcass of the dead badger from the A64 yesterday. The response was very swift.

There is still too much dog fouling going on in parts of York. Owners who do not clean up after their pets can face an on the spot fine of £75. This could be increased to £1000 if the case goes to a magistrates court.

You can report a fouled footpath by clicking here

The Council says, “If a dog bin is full or overflowing, we’ll empty it within 2 hours. If we get your report after 3.00pm, then the dog bin will be emptied before 10.00am the following working day.

If a bin is damaged or missing we’ll repair or replace it as soon as possible”.

City of York Council’s full council declared a climate emergency in March 2019, and agreed to set a target to become net carbon neutral by 2030.

A report is now being taken to the council’s Executive to provide an update on the next steps to progress the climate change action plan.

Following the climate emergency declaration, a new cross-party climate change policy and scrutiny committee was created to help develop the climate change action plan. Its first meeting will take place in September (and every other month after that).

The council is in the process of recruiting officers to two new posts to address sustainability and climate change to support on this work.

A report detailing the next steps will be taken to a public Executive meeting on Thursday 29 August.

York has a strong history of taking the lead on reducing carbon useage, including:

There were some raised eyebrows yesterday when the Council announced that £40,000 from a “rates pooling system” would be spent on art initiatives on the Castle car park.

The project was touted as being integral to the consultations still taking place on the future of the “Castle Gateway” area.

That is the consultation which started off in an exemplary and inclusive way but which is now disappearing into a mass of self-contradictions and public agonising.

Projecting artwork images onto Clifford’s Tower will tell us little more than we already know.

So, what could £40,000 buy that might make a bigger, and probably more sustained, difference to the York visitor economy?

The answer may lie in what you see when you look out of a train window when approaching the City. The Minster dominates the skyline but lower down we have a different picture.  We have our fair share of graffiti and weed infested public spaces.

It affects the image of the City and gives an impression of neglect.

The priority given to environmental crime by the Council can be seen in a report that its executive will receive next week. It reviews the successes and failures of the last year.

Littering and dog fouling don’t merit a mention. Prosecutions for those offences are rare

The number of graffiti cases does get a passing mention. There has been a recent upward trend in reports. N

o information is provided on the number of successful prosecutions.

It seems that people may have stopped reporting issues because the Council refuses to address those that are on “private property”. This includes boundary walls and telecoms junction cabinets. The real impact is probably much greater than the authorities will currently admit.

In Dringhouses Cllr Stephen Fenton has been out with a graffiti removal kit.

Independent Councillor Mark Warters has called for the owners of street cabinets (companies like Virgin Media) to be more systematic in getting graffiti removed quickly.

The new LibDem administration has promised to reinstate the Street Environment Officer system which worked well during the last decade when dealing with environmental crime issues.

All these initiatives are welcome.

However, an initial clean-up of all graffiti in the City followed by the deployment of camera surveillance to identify any repeat offenders would be a good way to invest any LCR funds which may be available.