York’s ageing traffic signals are set for a complete overhaul – the largest scheme the city has seen in over 20-years. 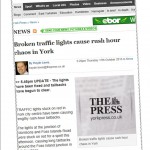 Overdue really as we have been reporting increasing problems with traffic light reliability over the last 3 years.

A report will be taken to a Transport and Planning Decision Session on Thursday 12 November to ask the Executive Member to give the green light to implement a new five-year replacement roll-out.

Over the years, City of York Council’s priority has been to repair immediate maintenance issues, to ensure that the safety and general reliability of the city’s signals requirements are met.

As such, signals have only been replaced on an ad-hoc basis as isolated schemes, or as part of larger improvement projects, such as the works on Boroughbridge Road for the new Poppleton Bar Park&Ride service. However, a recent detailed ‘condition survey’ which inspected the age and condition of every traffic signal in the city found some to be in poor or end of life condition.

This highlighted that there is a need for significant investment and to address this, the authority is proposing to take a new approach.

The council is proposing to replace approximately half of the 122 traffic signals and 54 pedestrian crossings in the city over a five-year rolling programme with modern equipment.

Work has already been undertaken at numerous traffic signal sites across the city, and the rollout will help to further address the backlog of maintenance and ensure the signals continue to operate at the level required.

Cllr Ian Gillies, Executive Member of Transport and Planning, said:“We’ve listened to residents and recognise that our traffic signals are not as reliable as they could be.  Investing now will help to bring our systems into the 21st century, saving vital time spent otherwise on repairs and maintenance and more importantly saving money from the public purse.

In addition to the new traffic signals, the authority will also replace the majority of the induction loop detectors which are installed in the roads surface and operate traffic signals with modern video camera based systems.

Traditionally, vehicle detection at York’s traffic signals has relied on these induction loops, but this method can suffer from poor reliability when carriageway surfacing deteriorates.

Trials in York are now underway of ‘above ground’ detection technologies using video and thermal camera systems. These have the benefit of not being reliant on road condition, are more reliable and are increasingly becoming the default choice for cities in the UK with Transport for London and Liverpool being two cities adopting this technology.

The costs for the proposals are around £2.620m, over six years. Of this, £220,000 for detector equipment is already allocated in the capital programme for 2015/16. A further £100,000 is recommended to be allocated in the 2015/16 Capital Programme Monitor 1 report to enable the main replacement programme to be commenced as rapidly as possible. It is proposed to use the existing Local Transport Plan budget to cover the remaining funding over the next five-years.

If approved, the council will then seek to go out to tender and award a single contract for the renewals programme work.

The Executive Member for Transport and Planning’s Decision Session will take place on Thursday 12 November at West Offices from 5pm and is open to members of the public or is available to watch live online from: www.york.gov.uk/webcasts

To find out more about the report, or to attend, visit:http://democracy.york.gov.uk/ieListDocuments.aspx?CId=738&MId=9030