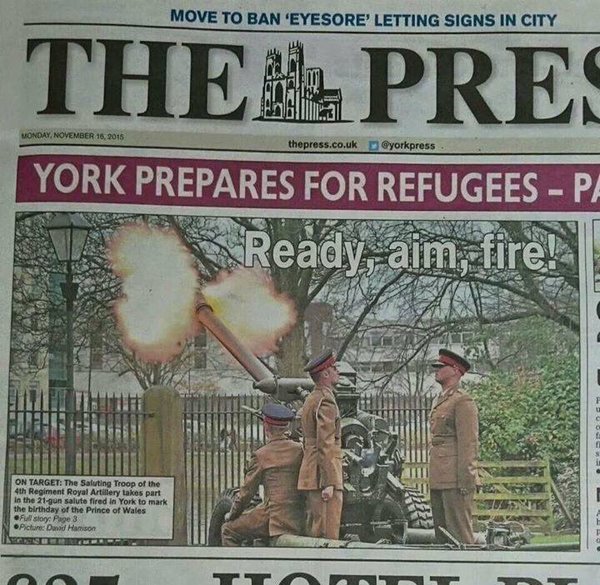 The local Press newspaper is generally an asset to the City.We are fortunate, in a world of instant social media access to news, that we have retained a daily newspaper which can provide some local  context and editorial depth.

But yesterday they got it baldy wrong when they ran a story about the apparent imminent arrival of 6o refugees into the City.

In reality we can expect a trickle of refugees starting sometime in 2016 – a fact that had been know for several days.

Most will be fleeing terrorism. Their profile is likely to reflect many religions and age groups, although the Government are known to be prioritising the resettlement of orphans.

Comments attributed to the Councils Deputy Leader were made two weeks ago as the Council was forced to provide an update on a process which started in September.

However, even worse than the timing of the Press story, was the way it was presented on the paper’s front page.

With much of the western world still in a state of shock over the Paris killings, a sensitive editor would have avoided either militaristic images or comments likely to stir up anti migrant sentiments.

Putting the two together was crass.

It maybe that the move of editorial control of the paper to Bradford is to blame?

Whatever the reason, the newspaper did a disservice yesterday to the existing and potential residents of our City

Community, faith, and academic groups met councillors and officers at City of York Council earlier this week to discuss York’s response to the refugee crisis.

The meeting was called to promote the York Refugee Appeal, a fund launched last month as part of the preparations being made in York to welcome Syrian refugees to the city.The meeting heard from representatives of various community and voluntary groups, and from partners from the housing, faith and academic sectors who are all working together to offer a co-ordinated response to the refugee crisis.

York’s response follows the Prime Minister’s recent announcement that the UK will accept up to 20,000 Syrian refugees over the next five years. Local authorities are waiting for more detail on what funding the government will provide for the resettlement scheme, but in the meantime the council is helping to create links across the city in order to be in an effective position to respond.

Cllr Chris Steward, Leader of City of York Council said: “York has a proud history of welcoming people to the city and it is great to once again see the generosity of many in York coming together to see how we can help.”

Cllr Keith Aspden, Deputy Leader of City of York Council and chair of yesterday’s meeting, said: “I’m pleased that as a city we have so many partner organisations working together to ensure that we are in a good position to be able to offer a warm welcome to Syrian refugees. The meeting highlighted that many donations have already been given in support, and I’d like to thank residents for their generosity.”

Residents who wish to make financial donations can visit the Two Ridings Community Foundation website, www.trcf.org.uk where further information is available on how to make donations online, by text or by cheque.

Other support is welcome and residents can visit the council webpagewww.york.gov.uk/refugeesupport for more details. This includes information about donating clothing and household items, for which the Student Centre at the University of York have kindly offered to act as a local collection point. 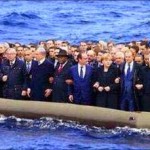 Representatives from City of York Council’s Executive have met with key partners on Monday to discuss how, as a city, York can best co-ordinate a response to helping Syrian refugees.

The meeting included partners from the voluntary sector, faith sector, public health, housing and universities and discussed how the various groups could work together and offer their experiences and resources towards a co-ordinated response in York.

Offers of support, including temporary accommodation in the private sector, have already been generously put forward to the council in response to the meeting. If anyone would like to provide accommodation, donations or other assistance, information on this can be found at www.york.gov.uk/refugeesupport .

A dedicated email address has also been set-up to channel any offers of support via refugeesupport@york.gov.uk . In addition to this, the council is also working alongside the regional co-ordinating body, Migration Yorkshire.

The call for action follows the Prime Minister’s recent announcement and commitment to bring up to 20,000 refugees to the UK.

The council is currently awaiting information from government on the detail of the resettlement scheme.

However, yesterday’s meeting has enabled the council and partners to be in the best possible position to respond to any offers of accommodation and ensure other support can be received by appropriate organisations once these details are known.

END_OF_DOCUMENT_TOKEN_TO_BE_REPLACED 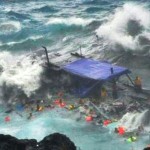 The Council has issued the following statement,

“City of York Council would like to thank residents for the many kind offers of support in respect of the Syria refugee situation.

City of York Council would like to thank residents for the many kind offers of support in respect of the Syria refugee situation. The Government is leading on developing the scheme for resettlement of refugees and you can find further information on their website.

The council is meeting partners from across the city to identify how York can best provide support, as we await information from the Government on how the process of resettlement will work.

Anyone wishing to provide accommodation should contact media@york.gov.uk in the first instance, providing full details of any assistance you can provide. We will then be able to contact you once we have further information on the process for providing accommodation.

If you are wishing to offer a donation or other assistance, you can also email this address and we will pass your details to organisations already working hard to support to refugees and asylum seekers in the UK”. 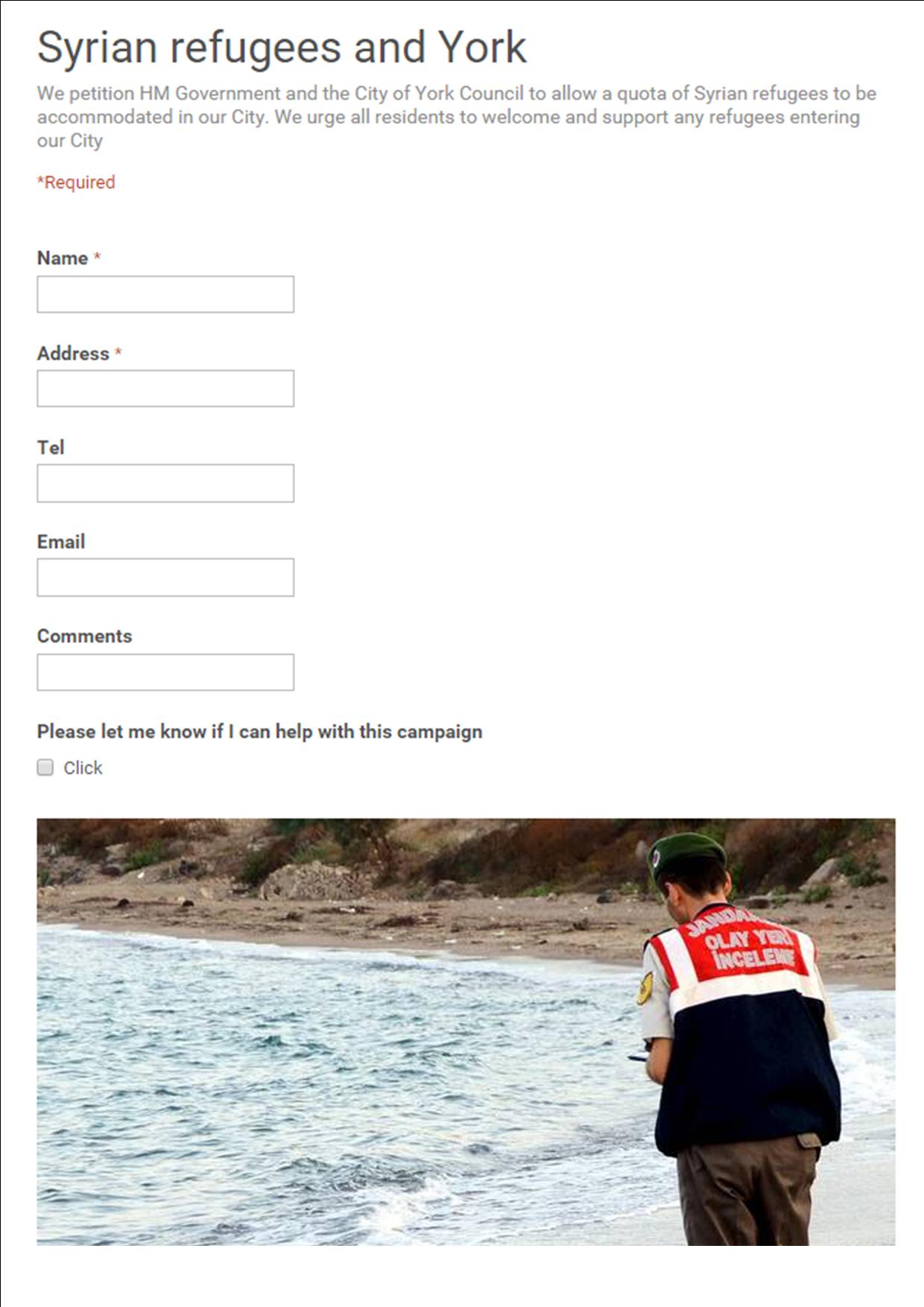 At a time when, arguably, the western world faces its greatest humanitarian challenge since the end of the Second World War, it seems strange that the York “City of Sanctuary” organisation launched in 2011 seems to have stalled.

A voluntary organisation set up a web site (click) but it has not been updated for over 6 months. 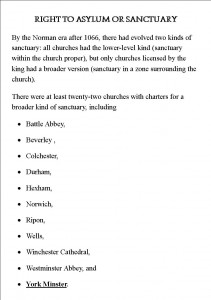 In the main the movement was originally intended to provide welcome and support in the City for refugees. It attracted support from a wide range of organisations including many Churches.

The “City of Sanctuary” title was a little awkward confusing the historic right of sanctuary in churches, which could and was exploited by criminals, with a more modern humanitarian ideal

It courted controversy in October 2011 when some Labour Councillors tried to hijack the idea to promote their own – political – agenda but, having got a press by line, they rapidly retreated to the side lines.

It is fair to say that the initiative prompted some extreme responses. Since then the rise of anti immigration sentiments, coupled with growing concerns about security,  have clouded the political background.

The Tory government is fighting to avoid being outflanked by the  extreme UKIP largely on immigration issues. The Labour party is embroiled in internal disputes apparently now feeling that the provision of seperate railway carriages for women is a topic worthy of high level debate! 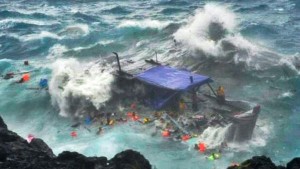 The UN states that at least 2,636 people have died over the last few months fleeing persecution in the Middle East

So should York take an initiative and say that it will find accommodation for (say) a dozen more refugees in the City?

It might prompt other, larger, City’s to take a similar stance.

Communities acting together might just prompt the government to show more compassion and treat people as people not statistics.

(NB There is a separate organisation “Refugee Action York” which works in similar field. It is a charity which depends on voluntary donations although it claims the support of the National Lottery and the City of York Council).