The York Council has admitted that traffic signal faults have more than doubled in the period between April and October 2013. 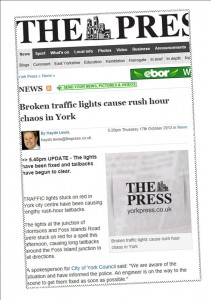 This compares to a total of 790 hours (573 faults) during the whole of the last financial year.

However, recent problems seem to have extended the capacity of the repair and maintenance contractors and motorists will be looking for a long term improvement.

Yesterday there was near grid lock conditions in the Foss Islands Road area following the failure of two sets of lights.