The York electorate will have had no say in the making of this appointment. Hopefully Labour Councillors will belatedly offer some transparency in the process.

It would, therefore, be good to see potential candidates tell York residents what they think that they could bring to the job of Council Leader?

The Leadership of the City is important and under new regulations it is the Leader who makes all the Cabinet appointments.

The Council needs a Leader with experience. To hit the ground running you probably need to have been a member of the Council for 10 years, with another 10 years having been spent in business, education or administration. This should provide the minimum necessary range of knowledge and skills.

The Press have given their view on the runners and riders. 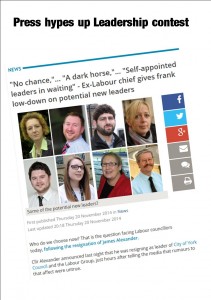 Several of the Councillors listed have less than 4 years service on the Council – meaning they have only ever won one election. Even the late incumbent, whose inexperience led to his eventual downfall,  had served for over 4 years when he took up the post.

So you should rule out Levene, Cunningham Cross and Barnes as serious contenders.

Some others have failed even more spectacularly with their portfolios.

One thought on “Labour Leadership contest”