Works will get underway from next week to construct a new cycle/pedestrian bridge over the York to Scarborough railway line in Haxby. 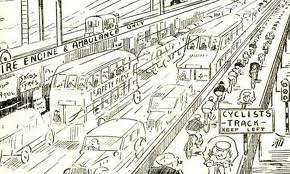 This will complete a new safe off-road shared cycle and pedestrian route along the A1237 outer ring road, between the Haxby Road roundabout and the B1363 Wigginton Road roundabout, connecting over 15,000 people living in this area of York.

The contractor PBS Construction (North East) Ltdwill fabricate the main bridge structure off-site, and then plans to lift it into place over the weekend of 15/16 November.

The works were originally planned to commence in 2013, but have been rescheduled to accommodate an alternative design to address ground condition problems, and to meet Network Rail’s requirements to enable contractors to have access to and work close to the railway line.

Works to complete the approach cycle paths will start soon after in late November as well as the installation of a new Toucan crossing on Haxby Road. The new path is planned to become fully operational in early 2015.

Unfortunately cracks have appeared in the section of the cycle track west of the railway line which was completed last year. These appear to be due to the dry summer causing ground movement in some isolated areas.

The council is currently assessing its options to address this problem, which may involve relaying some areas of the path surfacing and filling/sealing the cracks.

Neil Ferris, Assistant Director for Transport, Highways and Fleet, said: “This is one of the largest investments in York’s cycling infrastructure since the introduction of the Orbital Cycle Route in 2011 and will invest £925,000 from the government funded i-Travel, and Local Transport Plan (LTP) funding.

“We’d like to thank those living and working nearby for their patience throughout the period of the works and for the unforeseen delays that we’ve experienced. We are looking to find a solution to address the current issues that will be both long lasting and cost effective.  In the meantime we have put up signs that say the footpath is closed to deter people using it in the unfinished state, and while the overall route is not available.

“We would urge parents not to allow their children to walk or cycle along this path until the full route is open.”

The measures also include links with Haxby Road near to the roundabout, as well as approach ramps on the existing embankments to the new bridge and an additional crossing point on Wigginton Road to safely connect with Clifton Moor.

In addition to main bridge works, and the construction of the link paths, the council is also planting a new hedge alongside the A1237, next to the new fence line that has been established as part of the scheme. This planting is expected to happen in October/November.

The council intends to also amend the Public Right of Way across an adjacent field just west of the railway, with a view to improving access and reducing potential conflict between pedestrians, cyclists, and agricultural vehicles in this area.

The provision of an off-road route/safe link opens up access (sustainably, via cycling and/or walking) between Haxby, Strensall, Huntington, Earswick, New Earswick and to the retail, leisure and employment destination of Clifton Moor as well as students attending Joseph Rowntree School.

The new cycle route will be the flagship scheme of City of York Council’s four-year i-Travel initiative, made possible by £4.6 million of government funding which the council successfully bid for in 2011.

In addition to the new cycle route, the council has also addressed the lack of good pedestrian and cycle routes within the Clifton Moor retail / leisure area itself by investing almost £100,000 of government funding in 2013 on new pedestrian and cycle crossing facilities, cycle lanes, and measures to slow traffic speeds, by introducing easier and safer access for pedestrians and cyclists.

To find out more about the new cycle route and bridge visit: www.york.gov.uk/haxbytocliftonmoor