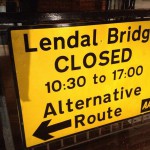 Sources within the Council have admitted that it is unlikely that the result of their appeal against the ruling of the Traffic Adjudicator on Lendal Bridge and Coppergate will be known for over 3 months.

This means that if a decision is – as planned – taken at the May cabinet meeting, on whether to make the restrictions on Lendal Bridge permanent, then Councillors will not know whether they could be legally enforced.

It also means that anyone driving on the roads at present – and for several weeks into the future – could not have PCNs enforced against them because they would be outside the 28 days time limit.