If they fail to do so, the government will be asked to intervene and hold a public Inquiry into the fiasco. 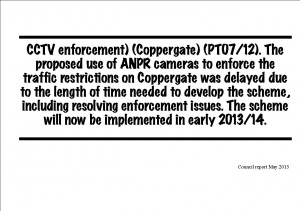 Labour have always been at pains to claim that the funding for the scheme had come from central government,  although in reality the Council could have chosen to use the money on other projects aimed at improving public transport.

Now, with the prospect of the government money going down the drain, plus the possibility of £2 million in fine income having to be reimbursed, the Labour leadership have been told to bring the sorry saga to an end.

Council reports (see right) reveal that doubts about the use of ANPR cameras had been raised within the Council over 12 months ago.

Local government Minister Eric Pickles has been critical of Councils that misuse their powers and particularly those who exploit motorists vulnerabilities.

Meanwhile the Council has been asked to urgently clarify how many motorists on both Coppergate and Lendal Bridge have been issued with PCNs each week since 28th February (when the bridge trial was supposed to end).