The Council has finally agreed to publish its Transport Masterplan covering the York North West development. Residents have until January to c comment on the implications of the 56 page (6 Mb) document which is available from the Council (or by Email from us in PDF format) 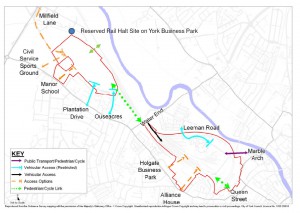 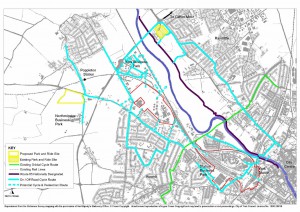 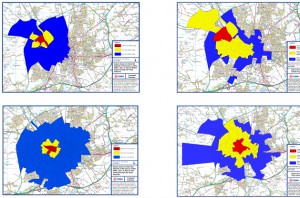 The plan rest heavily on the success of the new 10 minute Park and Ride service which will link a new 1250 space car park at Poppleton with the City centre. Planners say, “developments will ensure the provision of high quality, frequent public transport services from each development site that integrate with the current local bus network. Developments will also link the two sites by a direct local bus service”. Bus links to other parts of York would also be at 10 minute frequencies

“Park and rail” is effectively ruled out for the foreseeable future and with it hopes of a rail link from the British Sugar site to the City centre and beyond (the tram/train option) The report says, “rail is unlikely to provide a significant number of local journeys in the short-term, although development of light rail, including stops at the British Sugar / Manor School site (reserved site exists at the White Rose (York)Business Park) and within the York Central development, remains as a long-term aspiration for the corridor”.

Parking provision will be heavily constrained with less than 1 space per dwelling proposed. However “car club” use will be encouraged and provision for electric vehicles is suggested. Planners say, “ York Central should be a ‘terminus’ for private motorised traffic, which should not have through movement to the city centre”.

The proposed options’ for accessing the York Central site are as previously publicised (see earlier story on this web site) However the British Sugar / Manor School primary traffic access routes will include Millfield Lane (limited) and a direct access onto the A59 at either the former Manor School site or the former Civil Service Sports Ground.

The report goes on to say that there needs to be a major transfer of journeys from car to public transport and cycling. Employees will be encouraged to live within walking distance of their places of work (with incentives to do so)

Overall around £60 million of capital works are identified in the report with most of the investment needed on the Outer Ring Road. The figures do not include dualling or grade separation at junctions.

Significantly the cost does not include the necessary improvements to bus services, cycle routes or other junction within the City. Consultants talk of using the new “Community Infrastructure Levy” to pay for the improvements but warn that any such use must not make a development unviable.

And that is the problem. York central at least will be a highly expensive site to develop. Unless and until a business case – including all transport infrastructure costs – can be put together then the project will remain a dream.

In a recent survey, shop vacancies in York are down 1.2% over the last 6 months. 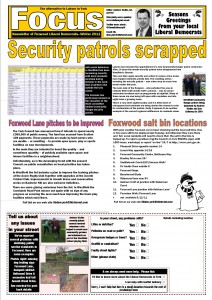 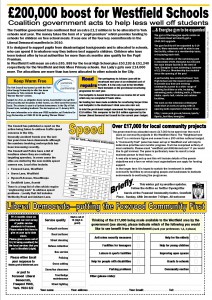 Reports are emerging from the York Council suggesting that 12 Councillors have been found to have broken the Councils Code of Conduct.

The Code covers – amongst other things – the declaration of personal and financial Interests at Council meetings. Part of the Code also requires Councillors to declare their Interests on a publicly available Register which can be found on the Council web site.

It appears that the 12 concerned may not, earlier in the year, have admitted on the register donations made towards their election expenses last May, contrary to the statutory requirements governing their behaviour.

The other 35 Councillors are understood to have made the declarations.

If true, the judgement by the independent Standards Committee would be without precedent in York. Referrals to the committee are rare with previously only a handful of substantiated complaints having been recorded over the last 10 years.

More on this issue will be published here as it becomes available.

Liberal Democrat Councillor Keith Hyman will be the next Lord Mayor of York it has been announced today.
Councillor Hyman, who has represented the Huntington and New Earswick Ward since 2003, will be formally nominated to be Lord Mayor for 2012/13 by Liberal Democrat Leader Councillor Carol Runciman at tonight’s Full Council meeting.

Councillor Hyman will serve as Lord Mayor in an important year for the city as it celebrates 800 years of self governance. York will also take part in celebrations for the Queen’s Diamond Jubilee and the London 2012 Olympics during Councillor Hyman’s time in office.

Councillor Hyman said he was proud to have been chosen to represent the city as Lord Mayor. He said, “Having lived and worked in York for most of my life this is a great honour and I intend, along with the rest of the Civic Party, to do my best to promote the City in the best possible light.”

“York is the most marvellous place to live and I feel privileged to now play a major role in its history. With so many events taking place throughout the year such as the 800 year celebrations I am sure I will get the opportunity to learn even more about our place as the country’s second city and the jewel in the crown for the North of England.”

Councillor Runciman said she was delighted to be nominating Councillor Hyman to be Lord Mayor. She said, “Having been brought up in York, Keith is well known by many people across the city. He has served this city well for many years and I think he will be an excellent person to take the lead during the 800 celebrations, the Mystery Plays and the Olympic year.”

Although we’ve reported several problems with public services in the area recently we no longer systematically check the whole of the Westfield Ward each week.

We suspect that no one now does so, although Council officials do their best to try to maintain standards.

If everyone checks key services in their street once week it is a lot easier to keep on top of problems.

Below are some of the issues that we HAVE reported recently. 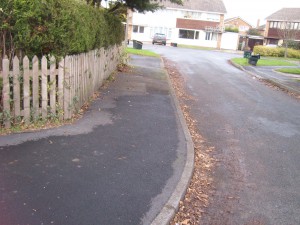 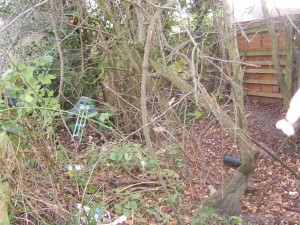 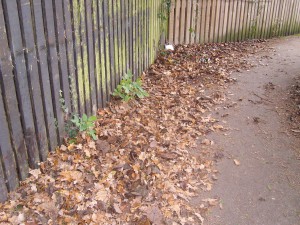 Leaves to be swept GreenWood Grove 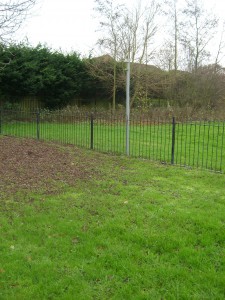 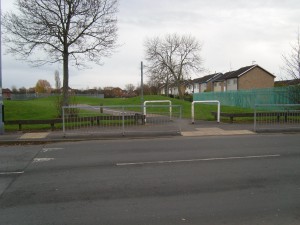 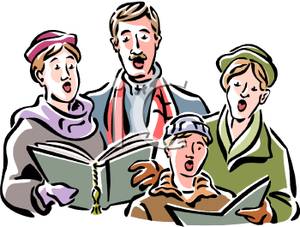 Police in York are appealing for information following an aggravated burglary in the city.

It occurred at a flat in Gisburn House, Acomb, just after 7.30pm on Tuesday 6 December 2011. Two men broke into the flat and assaulted the 23-year-old man who lives there with a metal implement.

The man suffered a head injury which, although not life threatening, has required treatment as in patient at York District Hospital.

DC Fionna McEwan, of York CID said: “I am particularly keen to speak to anyone who may have seen a man running along Front Street in the direction of Pateley Place between 7.30pm and 8pm.”

Anyone who can help the police with their enquiries is urged to contact DC Fionna McEwan at York police station on 0845 60 60 24 7. Press option 2 and ask for Fionna McEwan by name.

About 30% of salt bins scheduled by the Council to be sited in the Foxwood area have yet to be deployed. An audit conducted on 6th December suggests that the map displayed on the Councils web site is inaccurate.

This is a shame as we are now well into the time of year when icy roads and footpaths can become a problem.

It seems that local Councillors have not checked the salt bins this year so it will very much be up to local residents to ensure that the bins are where they should be, that they have been filled and that they remain topped up.

The bins that should be deployed in the Foxwood area are located at:
1. Pheasant Drive opposite number 14
2. Linnet Way opposite 14/16
3. Foxwood Community Centre, Bellhouse Way *
4. Bradley Drive near 25*
5. Saddlebrook Court (ELP) Herman Walk*
6. Fir Heath Close outside 5
7. Foxwood Shops
8. Beechwood Glade
9. Otterwood lane near 34
10. Askham Croft at junction with Waterman Court
11. Foxwood Lane junction with Askham Lane*
12. Foresters Walk/Foxwood Lane
*Missing @ 6th Dec
A full list of the bins which should be available in the Westfield area is reproduced below 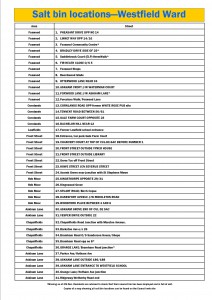