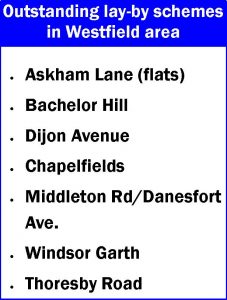 Highest level of dissatisfaction relates to poor parking provision in estates. Despite funding having been made available, Council officials seem unable to deliver the additional parking pal-bys in locations that have been identified. It is a problem in parts of the Westfield Ward where 6 schemes, some dating back as far as 2016, have yet to be started. Only one, in Spurr Court, has been completed recently.

There are other areas where tenants say improvements are needed

The Council was criticised by 1/3 tenants who said the landlord did not listen to their views. This was a marked increase in dissatisfaction since the previous survey was completed.

In 2018 the York Federation of Tenants Associations was wound up, with no independent voice now articulating residents concerns in many of the City’s estates.