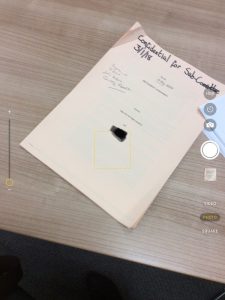 One strange fact to emerge during Thursdays marathon meeting, which looked into allegations of misconduct against a local Councillor, was the fact that a key witness had signed a “Non  Disclosure Agreement” (NDA).

The witness had been a former employee who had admitted a breach of the officers code of conduct.  He faced dismissal but apparently “jumped ship” first. The terms of his leaving were not revealed but usually Non Disclosure Agreements are implemented when a payment of some kind has been made. They are intended to guarantee the silence of the individual concerned, unless any statements are made with the (former) employers agreement.

This proved to be slightly awkward on Thursday as the defence team had not been made aware of the NDA document before the day of the hearing.

Non Disclosure Agreements are common in parts of the private sector with companies trying to strengthen their intellectual property rights position. In return for their discretion, former employees enjoy a bigger payment than they were expecting.

We have commented before about the prevalence of compromise agreements, and the non disclosure deals that follow, at the York Council. 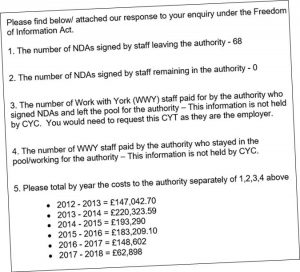 The Council did some years ago lift the veil on the number of such deals that they had agreed to.

During a period of 5 years it entered into 41 such agreements. In the main these were aimed at preventing employees pursuing cases through an industrial tribunal (which in fairness can be an expensive process for all side involved)

More up to date figures were provided by the Council in response to a Freedom of Information enquiry in November 2018 (right).

They revealed that there had been 68 NDAs made during a 6-year period.

Payments should be authorised by senior Councillors who meet on most Mondays to consider redundancy applications .

A typical agenda for such a  meeting can be found by clicking here. The meetings are held in private

There is a suspicion that, in parts of the public sector, NDAs have become the norm with some senior managers reluctant to challenge bad behaviour.

Instead they take the easy way out….. at substantial cost to taxpayers

Those who attend stadium events on a regular basis will know that getting a reliable phone signal can be difficult. Even 4G is often not always available particularly in steel framed buildings. A free WiFi signal can be a boon for those seeking the half time scores from elsewhere or seeking to email an update home on how well the concert is going.

Next week the Council is being asked to fund the provision of free WiFi access at the new stadium as well as at Clifford’s Tower and Coppergate.

Some schools also have the service but it is not universal.

There will be some scepticism about the budget priority for this programme. No usage figures for the existing free network are provided in the officer report.

There are other IT related services in the City which are arguably more urgently needed including the extension of the Councils “on line” issue reporting system and the reintroduction of “on line” and “on street” car park space availability information.

The Council even claims that it doesn’t have the technology to do routine things like the provision of a real time list of vacant garages on its web site.

These may all seem rather more urgent than allowing a tourist to browse the web from the top of Clifford’s Tower.

There will also be an ongoing debate about whether the costs of installing this facility should be a charge on users rather than taxpayers more generally?