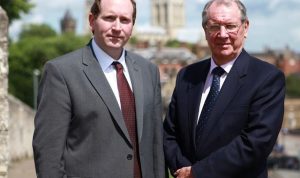 Cllr Aspden (left) with Cllr Carr who was the Council Leader when the allegations were made. Cllr Carr summarily sacked Keith Aspden from his Executive role.

A York Council “standards board” committee has found that allegations against Cllr Keith Aspden have not been proven. The case centred around a claim that job application papers had been circulated prior to a discussion with third parties in a York pub in 2016.

The committee took over 10 hours to sift through evidence before throwing out the claims.

The committee did however, rightly, say that job applications should not be discussed with third parties and ordered that additional training be given to those involved in job interviews.

The decision ends a 2-year investigation which was instigated by a “whistle-blower” who had himself been sacked by the Council. The claims were first raised some 2 years after the alleged events had taken place.

The investigation is believed to have cost the Authority around £100,000.

The cost to Cllr Aspden, in legal fees and loss of earnings, is thought to be around £20,000.

Attention is now likely to turn to the possibility of compensation.

The Council faces some difficult budget choices in a few weeks time. This case has been an unwelcome and costly distraction