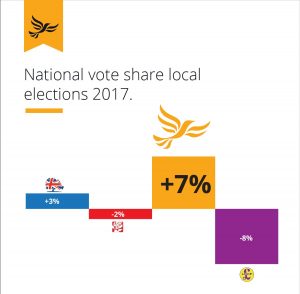 This years local Council elections (there were none in York) were overshadowed by the upcoming General Election.

It was clearly a good night for the Conservatives although the biggest increase in vote share went to the LibDems. This wasn’t translated into a gain in seats won, but the real losers were Labour and UKIP (which was wiped out).

The Conservatives now hold 55 seats on the North Yorkshire County Council  with Labour on 4, the LibDems on 3. There are 10 independents, some of whom are effectively also conservatives.

So in effect, to use the Prime Ministers ill judged comment, the opposition has been crushed. This is as near as you are likely to get to a one party state in what is a democratic country.

in North Yorkshire only 53% of those voting chose the Tories but their huge majority reflects, once again, the vagaries of the English voting system.

This has happened in the past. Only 6 opposition Councillors were elected in 1977 to what was then a bigger authority. During the following 4 years the opposition parties struggled to scrutinise proposals put forward by the ruling group. It was a problem exaggerated by the size of the county. Inevitably it also led to internal rivalries in the controlling group which became more inward looking. Polices were pushed through with little notice being taken of residents views.

So can your Councillor make a difference?

In York the Council has recently published a list indicating the number of enquiries recorded by individual Councillors in a year.  An updated version covering 2016/17 is due out shortly.

It confirms what most will have suspected.

There are some hardworking and proactive Councillors in the City.

Many routinely walk or cycle round their wards identifying and reporting problems with public services. In many cases residents will not even know that a remedy was initiated by a Councillor. 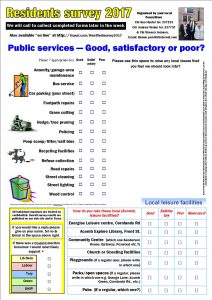 Some Councillors have regular “surgeries” while others conduct door to door surveys (left) to establish residents priorities.

So many do make a difference to the day to day lives of residents.

This weeks local elections results may have more to do with national issues than  local performance.

Some good Councillors from all parties will have lost their seats on Thursday through no fault of their own.

Their communities will be poorer as a result.