Devolution of rail franchising on agenda

Details of the terms that would apply to York’s continuing participation in the project have been revealed in a comprehensive report.

The decision was made by the Councils Chief Executive. 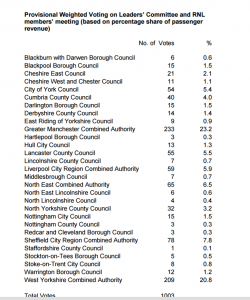 The voting power that the City would have in the conglomerate (54 votes out of 1003) are revealed (see left).

The City would pick up the same proportion of the costs. No indications are given in the papers of the scale of any such liability.

In the short term they are described as “nominal”.

The new franchises for the Northern and TransPennine services were announced a couple of weeks ago.

The new Council seems to be doing little better than its predecessor on transparency issues.

There is really no reason why the relevant reports like these could not be published before meetings actually took place.

Other recent behind closed doors decisions include: