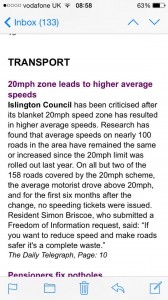 Hot on the heels of revelations that accident rates have increased in some City’s where wide area 20 mph speed limits have been introduced now comes news that average vehicle speeds may also be increasing.

The main objection to the York Councils £600,000 programme of 20 mpg speed signs has been that it would have little, if any,effect on driver behaviour.

The York Council has been reluctant to report on the effects that the wide area speed limit in the Bishopthorpe Road area have had.

A Freedom of information request will reveal whether average speeds have reduced and to what extent.

Residents will also want to know whether any of the, increased number of, serious accidents which occurred in the City last year took place on roads with a 20 mph limit. (Most accidents in the York area occur on trunk roads or are slow speed impacts in the City centre).

All in all it seems to be time for the Council to provide residents with more feedback on their controversial project..