Its over a year since the York Councils last Chief Executive – Mary Weastell – retired. It was thought to be the end of what had been an awkward relationship.

An auditor’s report from Mazers, issued yesterday, criticises the process used to approve the terms of the early retirement.

We said over a year ago that details of settlements (anonymised to protect the privacy of individuals) should be published.

That still does not happen in York. 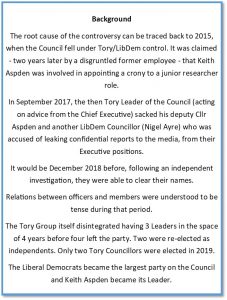 What happened after the May 2019 elections is the subject to varied interpretations.

However, very soon after the poll Mary Weastall went absent on sick leave.

It appears that negotiations about her future then extended over a 12 month period.

There were (unsubstantiated) allegations of bullying while the Council said that it wanted to reduce ongoing costs by doing away with the post of Chief Executive.

In turn this attracted what is known as a public interest report from the Councils external auditors. In essence taxpayers had claimed that an estimated £400,000 (actual £377,115) pay off given to the departing Chief Executive was excessive.  Most of the money went on pension contributions.

The auditors are critical of Keith Aspden for not declaring a personal interest at the (private) meeting which determined the payment to be made to the former Chief Executive. They confirm that this was not a pecuniary interest as Councillors have access to public liability insurance cover.

(Mazers fall short of their own standards when quoting from a 2017, supposedly independent investigators report, which subsequently turned out to be far from “independent”. It was considered at a public meeting – at Cllr Aspden’s request – on 3rd January 2019. They also omit to mention that the bogus investigation cost taxpayers over £100,000 and Cllr Aspden £20,000 himself)

The auditors confirm that the former Chief Executive was kept on full pay throughout her sick leave absence. Her contract provided only for 6 months on full pay followed by 6 months on half pay. The difference amounts to £18,165.

The Council has said that it accepts the recommendations and will act to changes its procedures.

Although the now notorious audit report on irregular staff payments is not on the agenda for the York Councils next Audit committee meeting, several other issues are. 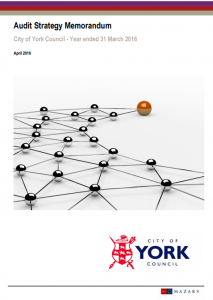 The Councils auditors (Mazers) annual report does conclude that group accounts for “City of York Trading” and “Make it York” are not required.  The publication of separate accounts would make it easier for taxpayers to understand the level of any cross subsidy enjoyed by these organisations.

The Auditors do say, “In all entities, management at various levels is in a unique position to perpetrate fraud because of the ability to manipulate accounting records and prepare fraudulent financial statements by overriding controls that otherwise appear to be operating effectively. Due to the unpredictable way in which such override could occur, we consider there to be a risk of material misstatement due to fraud and thus a significant risk on all audits”.

They go on to conclude, “There have been some high profile examples of problems with project delivery, such as the housing for older people procurement and more recently with the community stadium project. This has been the first year of operation of the Better Care Fund, which requires the Council to work with the local CCG and the wider health economy to reduce demand for acute healthcare. Any failures in these areas could compound the Council’s financial and operational difficulties and impact adversely on services provided”.

The background papers published yesterday list some individual areas which are being audited. 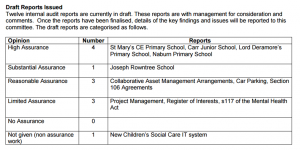 These include Project Management, Register of Interests and s117 of the Mental Health Act.  Draft reports on these issues reveal only “limited assurance” – meaning there are significant issues to be addressed. The reports are in draft form only and are being review internally at this stage. All are potential matters of public interest (S117 of the Mental Health Act requires authorities to provide community support for people leaving hospital).

Reports already issued reveal that several departments have not agreed performance standards with the Councils reception (business support) unit.  Two years seems a long time to wait for the Council to publish target times (and performance) for dealing with issues raises electronically. Recently reports of fly tipping took nearly two weeks to be passed on to the team responsible for actually tidying up some dumping.

Similarly, the auditors did find some sensitive information in offices when they did a security sweep.

NB. The Councils Executive has so far failed to clarify what issues will be discussed at its 24th April meeting when the Public Interest Report on irregular staff payments is on the agenda.