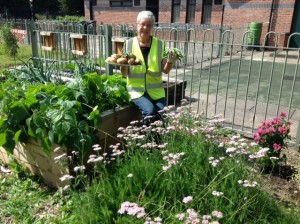 As part of the Big Community Challenge which was carried out at Foxwood Community Centre last October, three raised beds were constructed.  These were rented out to local people at the modest cost of £20 for the year.

They have proved very productive with onions, lettuce, potatoes, peas and beans all being grown.  Picture shows local resident Shirley Gumley with some of the produce grown.

Apple and pear trees have also been planted.

Anyone interested in taking a raised bed and who lives in the Foxwood area, should contact Sue Galloway on 01904 794111.