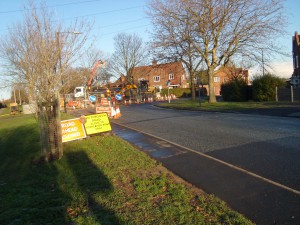 Work ongoing at the sewer repairs on Askham Lane at the Cornlands Road junction today.

Surprisingly Yorkshire Water don’t seem to provide updates on sewer repairs so residents are left in the dark. The Council will be using section 74 to charge the contractors for the road closure… but costs will enventually be passed on to customers.

When the contractors are on site some access is available via traffic signals but this does vary. Access was available down Askham Lane on Friday but not today (Sunday). So a bit of a lottery.

Altogether an unsatisfactory series of events.

The Home Heat Helpline was launched by the Energy Retail Association in October 2005. The helpline advises people worried about paying their fuel bills and keeping warm during the winter. It also gives advice to low-income households in urgent need of heating help and advice. It is free to call and is open 9am-6pm Monday to Friday.

Calls to the helpline are answered by one of our friendly expert advisors at our call centre. They can give you quick, clear information on the grants, benefits and payment schemes that you may be entitled to as well as basic steps that you can take to save money on heating bills by making your home more energy efficient.

After asking you a few questions the advisor may put your call through to an appropriate specialist team at your energy supplier or another advice or grant giving agency, for further assistance.

Anyone wanting to rent privately could have a look at these properties.

Detectives investigating a series of robberies in York are appealing for two potential witnesses to come forward.

In relation to the attempted robbery near Blockbusters on York Road in Acomb, police are seeking two people who may have vital information.

The victim ran away from the suspect along Front Street and as he ran, he passed two members of the public who were stood near to the Barnardo’s charity shop.

Police are appealing for these two people to contact them as they could have vital information which could help the investigation.

If you were on Front Street in Acomb at around 11pm on Friday night (16 December 2011), please contact York CID by calling 101, select option 2 and ask for Detective Constable Mike Avison by name.

Alternatively, you can give information anonymously to Crimestoppers on 0800 555 111.

Detectives investigating a hand-bag robbery in York on Thursday (15 December 2011) have stepped up their appeal for information after receiving three more reports of robberies in the city.

At around 6.15pm on Friday 16 December, a 40-year-old man was threatened by a man with a baseball bat at the allotments on Fulford Road in York. He also threatened the man with a knife although he did not produce one. He stole the victim’s wallet.

Between 7.30 and 8.30pm on Friday 16 December, a 15-year-old boy was walking along the side of the River Ouse with a friend when he was approached by a man on a bike. The victim had just walked under Scarborough Bridge when the attacker shouted at him. He then threatened the boy with a knife and stole his wallet and mobile phone. The suspect is described as white, with short blonde hair and was wearing a black hoodie with the hood up and was riding a BMX type bike.

At around 11.pm, the same evening, a 24-year-old man was walking along York Road in Acomb and was passing the Blockbusters store when he was threatened by a man who claimed to have a knife. The victim ran off and nothing was stolen. The suspect in this incident is described as having blonde hair, aged in his early twenties and was wearing a black t-shirt with blue writing.

In the previous incident on Thursday 15 December, a 52-year-old woman had her handbag stolen by a man riding a bike on the railway footbridge between Leeman Road and Wilton Rise.

Detective Inspector Ian Dyer of York CID, said: “There are similarities in all of the incidents. However, a baseball bat was seen in just the one incident at Fulford Road allotments.

“We need to catch whoever is responsible for these robberies, they are frightening and cause great distress to the victims.

“Detectives are examining CCTV to try and trace the offender’s movements and identify him. But we also need the public’s help.

“If anyone saw a man matching the suspects description or knows who the offender may be, I urge you to contact us urgently.”

“If members of the public find any discarded wallets or handbags, please call the police straight away.

“Please help us to catch whoever is responsible before they strike again.”

Anyone with information is urged to contact North Yorkshire Police on 101 – select option 2 – and ask for York CID. 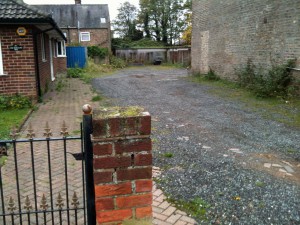 The planning application – to demolish a bungalow and garage at 42A The Green and replace it with 3 x 3 bedroomed houses and a block containing 3 x 1 bedroomed and 3 x 2 bedroomed flats, with 15 car parking spaces (currently 5 spaces exist) – has missed the 16th December deadline for determination.

This means that the Council will be under pressure to make a decision asap in the new year. The next West Area planning committee is scheduled to take place on 12th January.

There have been 2 objections to the development both listing traffic and parking concerns.

Details of this and other planning applications can be viewed on the Councils “web portal”. http://planningaccess.york.gov.uk/online-applications

Recent applications in the Westfield Ward include:

2 City of York charities and groups are celebrating this week after they were chosen to receive an award from a pot of criminals’ cash.

The money has been seized from criminals under the Proceeds of Crime Act (POCA) by North Yorkshire Police’s Financial Investigation Unit.

Head of the unit, Detective Inspector Ian Wills, said: “Once again, we are extremely impressed at the extent of the fantastic work going on in our communities to improve life for local people.

Last year, the Financial Investigation Unit took £1.3m off North Yorkshire criminals. A percentage of this is given back to the force, which enables North Yorkshire Police to fund the Why should they? campaign.

Members of the public can help the campaign by reporting anyone they suspect of living off illegal earnings. Either call North Yorkshire Police on 101 or you can pass information anonymously to the independent charity Crimestoppers by calling 0800 555 111. You do not have to give your name and could qualify for a cash reward.

The winning organisations in York for 2011 are:

The Joseph Trust Wood and Craft Workshop have been awarded £2,000 to upgrade their woodwork shop. The charity, which is based in the village of Melbourne near York, provides training and support for disadvantaged young people.

The trust was established in 2005 after one of the founders, Joyce Dean, began fostering troubled 16-year-olds. She discovered that once they left her home at 8am, they had nothing to do and were left to their own devices until they returned home at 6pm.

The main aim of the project is to provide important life, work and social skills for young people who may find themselves in difficult circumstances. The charity also offers training towards NVQ qualifications.

Previous projects include working with young people from Future Prospects, York, and Leeds Youth Offending Teams, as well as a group of young people with learning difficulties from York. as it was at 2006

The project is currently working with the City of York Council’s Danesgate Student Support Unit in York which provides education for children permanently excluded from school, or unable to attend school. Some students from Fulford School are also benefiting from the trust.

Although a York-based charity, they were unable to find suitable premises for their work in the city.

Approximately four years ago they were offered five acres of land, on which they have built a craft and wood working workshop along with two poly tunnels, a stock of fowl and land for growing crops.

The trust is supported by the Home Office Youth Justice Board, Wetherby Young Offenders Institute and the Learning Skills Council.

The money will be put towards work benches, rewiring, dust extraction and ventilation units and tools.

Space 109 was founded by a local, single mum to provide activities for residents of all ages in the Walmgate area of York. From toddler groups to music and craft groups, most of the activities are organised by 100 volunteers.

This invaluable community arts centre will receive £2,000 to help towards the expansion of their Homework and Cooking Club which is free to all children aged 8 to 16 in the local area.

A recent survey of community needs identified a demand for projects for young people which would help to steer them away from anti-social behaviour and any temptation to deviate into criminality. 92% of local residents said they would use the facilities, 98% believe young people should have somewhere to go and 88% believe more facilities are needed to keep anti-social behaviour and crime at bay.

By providing a positive and creative outlet, the club gives young people an opportunity to learn valuable life and social skills.

The homework club also means that children keep up with their school work, giving them a sense of achievement and reinforces the importance of doing well at school. The club also fosters skills in team working, self esteem, community pride and healthy eating with the youngsters obtaining a qualification in basic food hygiene.

The volunteers who work at the centre also benefit by developing their skills, leading to improved employment prospects.

We now understand that it could be Christmas before the work on repairing a damaged sewer on ASKHAM Lane near its junction with Cornlands Road will be completed.

The repair was originally scheduled to be completed 3 weeks ago.

Yorkshire Water have said that the job has proved to be more difficult than anticipated. 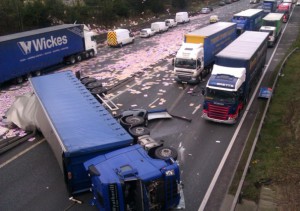 Lorry crash on A1M near York

Meanwhile a major accident, which closed the A1M today, has caused 1000’s of vehicles to seek alternative routes through York. The A1237 was almost gridlocked this afternoon. 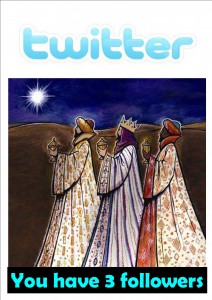 The Press is reporting that when children at a York toddler group at the Gateway Church in Acomb sang the children’s favourite Twinkle Twinkle Little Star, they innocently made signs with their hands to indicate a twinkling star.

“But parents were startled when staff asked the toddlers to use a different gesture – because the one they were using had an unintended double meaning in sign language for deaf people”.

They asked the children to use a different sign.

We hope this is misunderstanding.

It’s just not the kind of publicity that the community needs at Christmas.

Police in York are offering free cycle marking in the run up to Christmas.

A team of officers from the York West Safer Neighbourhood Team will be at York College, Tadcaster Road between 10am and 4.30pm on Saturday 17 and Sunday 18 December 2011. They will be marking cycles and registering their details on a national database.

York West Safer Neighbourhood Team Sergeant, Iain Sirrell, said: “As this is the last weekend before Christmas it is an ideal opportunity to drop in and have the bikes you have bought as gifts stamped.

“I would urge people to take advantage of one of these sessions as a deterrent to thieves.

“We would like to see as many people as possible come along to the event so that the bikes can be registered with the local police and on www.immobilise.co.uk, which covers the whole country.

“Having your bike marked allows the police to easily and quickly identify bikes that are lost or stolen.”