Councillors will today be asked to approve design plans for the York Central site. The area behind the station has been ripe for redevelopment for nearly 2 decades now as the demands of the rail industry have reduced. 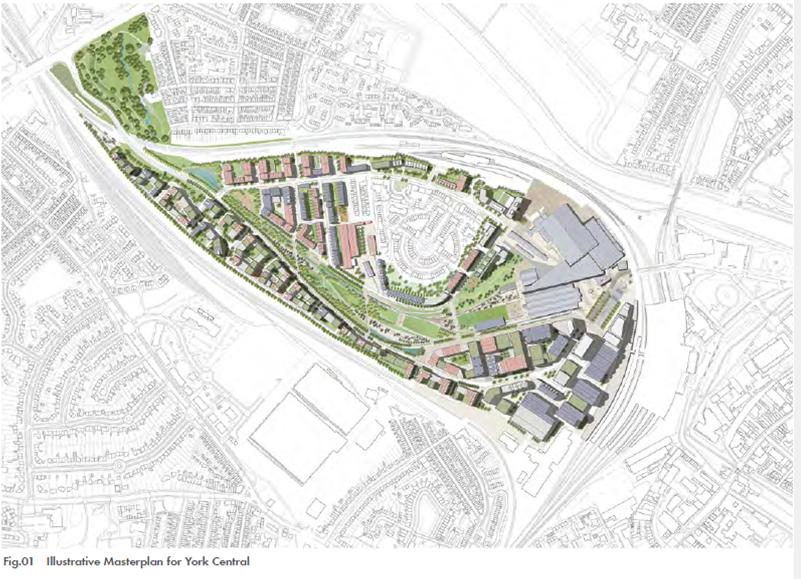 York central  is a large and hugely expensive site to develop but has the advantage of being close to intercity transport links and a City centre which boasts a full range of amenities.

The design guide springs from a comprehensive public consultation process which managed in the end to avoid the obvious dangers of raising unaffordable expectations.

The design guide rightly concentrates on the impact that a dense, and relatively tall, development will have on the rest of the City. It passes that test and goes on to tell a convincing story about street and layout potential. It may be a little short on iconic USPs although the idea of an old steam train running through the site will appeal to many.

But perhaps the approach does tend to be “all things to all men”.

It talks of a large increase in office space at a time when the City has full employment and some empty office units. A report implies that the York Council might underwrite some of the new floorspace space. But the Council is already doing so at the Community Stadium site while the £12 million white elephant business centre at the Guildhall had still to find tenants.

The main issue may prove to be access and transport.

Even footpath links between the Carlton St area and the City centre look – for most of the evening – to be longer than currently is possible. The one-way system to benefit cyclists through the Leeman Road tunnel has also (rightly) been vilified.

The development partners will have to find funding for a discrete pedestrian/cycle bridge over the railway line – a solution which might also address other permeability issues and might even provide an alternative route for the Railway Museums “Disney” train which currently obstructs general traffic routes in the City centre.

The design guide refers to parking space provision at “up to 1 space” per house (0.45 spaces per flat). This suggest that many cars will be parked “off-site”.  The Council will need to be clear whether this would be at a peripheral on-site location or at a sub-urban park and ride site (with its security implications).

The design guide fails to address other transport needs such as recharging/refuelling points for electric/hydrogen buses. Indeed, the guide is weak on public transport infrastructure requirements generally.

In the main though, the guide does address the main planning issues and is a welcome step forward for the project.

Whether the actual planning applications can be faithful to the concept, and remain affordable, may become clearer later in the year.