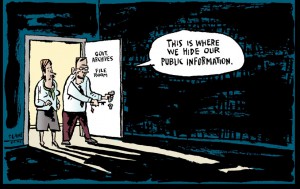 Readers may recall an incident last year when the York Council refused Freedom of Information (FOI) requests in the run up to the General Election in June.They said the information might “influence how electors cast their ballots”.

They claimed, for example, that residents should not be told how many issues individual Councillors had raised with the Council on behalf of their constituents.

We pointed out that, as none of the Councillors were election candidates, this information couldn’t have influenced their chances.

It could be argued, in any event, that – as FOI requests can only be made for factual information – the more facts that are known, the more likely electors are to make an informed choice!

That issue is currently with the Parliamentary Ombudsman to investigate. That referral is on the basis that the Information Commissioner should have issued guidance to Local Authorities on what may, and what may not, be published.

Most Councils continue to respond to FOI requests during election (“purdah”) periods.

York is in a small minority that don’t.

Now a similar situation has arisen just 4 days before a Council by election takes place in the Holgate ward,.

The Council has refused to publish a list of businesses who have not paid their Rates bills during the last 3 years. This is information that used to be routinely reported to a public Council committee meeting. That committee might, on occasions, authorise some debts to be written off.

Quite why a list of businesses, with outstanding debts, could influence the way that the electors of Holgate will cast their ballot is open to conjecture.

It may make some people wonder if there something to hide?