No choice to be offered to those in housing need 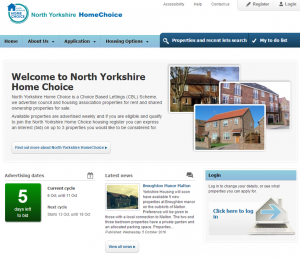 On 17 October the York Council is likely to authorise changes to the current housing registrations service.

City of York Council operates a choice based lettings (CBL) system for applicants to bid for affordable rented homes across North Yorkshire and York. The system was introduced by the LibDem administration in 2011.

The Council says that “a recent review of it has identified changes that would streamline processes for applicants and officers. The detailed consultation and review included involving staff from multiple council services as well as visits to other local authorities that use other application or bidding systems. The council also conducted two consultations with customers on the current system.

The Executive Member will be asked to give officers authority to work with the North Yorkshire Home Choice partnership to discuss changing from a choice based lettings (advertising and bidding) system to an officer allocation system based on customer preference, and also to start discussions about future changes to the allocations and letting policy.

This workshop will provide an understanding of Post Traumatic Stress Disorder, why it might develop, guidelines around treatments, what is available in York and touch on some self help approaches.

The York Council have issued a statement saying that their Executive will be asked to approve an amended Traffic Regulation Order (TRO) for Coppergate at a meeting on 13 October “in a bid to help reduce congestion in the area and improve York’s bus services”.

The council’s Executive gave approval in June to advertise a TRO to provide bus priority in Coppergate that could be enforced using automatic number plate recognition (ANPR) equipment. The aim of the TRO is to help improve York’s bus services by reducing congestion in the Coppergate area.

Due to the prominent location of Coppergate it was decided to advertise the TRO for six weeks rather than the statutory three week period. Eleven representations were made during this period with the finalised TRO taking into account comments received from the emergency services to help them better serve the community.

The draft Traffic Regulation Order provides the details of the restrictions to be in place every day from 8am and 6pm.

In summary within the 8am to 6pm period the restrictions for motor vehicles will be:

· 8am to 10am buses, taxis and private hire vehicles only

· 10am to 4pm buses, taxis, private hire vehicles and loading only

· 4pm to 6pm buses, taxis and private hire vehicles only

If the amended TRO is approved Executive will also be asked to approve enhanced signage to alert motorists of the TRO ahead of and during implementation. Options for the increased warning signs include

· temporary advance warning notices at 28 locations across the city

· carriageway surfacing and markings at either end of Coppergate

Alongside this there will also be a grace period where drivers will be sent a warning letter during the first two weeks of the scheme. After this a first offence warning letter will be issued to motorists for the following six month period.

If Executive approve the recommendations it is proposed that the scheme will be in place from early  2017.

Executive takes place on Thursday 13 October from 5.30pm and is open to members of the public

Adult Carers receiving support services from City of York Council will be asked for their views on the services they receive over the next few weeks.

This survey, which is being run nationally, looks to find how services received by carers are helping them in their life and their view of services provided to the cared for person and where improvements can be made.

The questionnaire will be sent to over 900 carers across the city from next week and the consultation will close on 18 November. The survey will be undertaken in every local authority in England, and will result in the most significant pool of personal outcome information for those carers to date, providing an important resource for understanding services for carers and enabling them to make better choices about their support.

The survey looks to hear carer’s views on the quality of life of both themselves and the people they care for and looks to understand the impact that the services they receive have on quality of life.

Cllr Carol Runciman, Executive Member for Adult Social Care and Health said: “The information we get from this national annual survey of adult carers is incredibly useful in helping us to evaluate and improve our services for carers and cared for people in York.  As well as understanding the views of carers across the city this survey will enable us to compare the experiences of people living in York with those who live elsewhere in the country.

“I would urge everyone who receives a survey to complete it and return it as soon as possible and would like to thank carers and their families for their help with this process.”