The future of the Guildhall and nearby buildings was last discussed in July 2013.

In a controversial decision the Labour Cabinet decided to allocate £400,000 towards developing a business case to create a “Digital Media Centre” on land to the side of the old Guildhall building.

The report at the time relied heavily on plans to get Lottery funding for the project. Such funding has never materialised and now a Council report to be considered next week reveals the costs and obstacles to the plans. 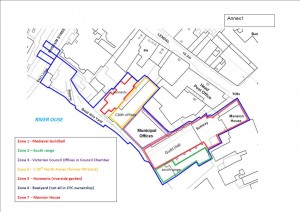 The Council has published details of how a new Guildhall might be reconfigured (right).

Apart from the small matter of hijacking the historic public building for use by a special interest group, an additional floor could be added to the south annex to form a restaurant and bar.

Just what that part of York doesn’t need!

There are no guarantees of continued casual access to the Guildhall which is an important part of the City’s heritage and tourist offer.

However it is the “business case” which will raise most eyebrows.

As previously reported, the council is being recommended to invest £9.2 million in the development. The capital costs break down like this: 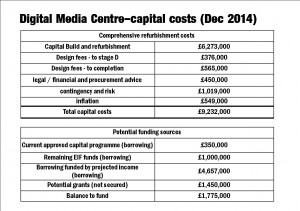 Although the Council claims that £4.6 million could be repaid from rental income, no projected revenue budget has been provided.

There is no indication of the potential rental prices and no anchor tenants have been identified.

The complex wouldn’t even open until 2018.

All in all, the way that this has developed looks very similar to the muddled thinking that linked – in Council official’s minds – the need to lose the costs of running swimming pools by aggregating them into the Community Stadium contract.

The result was 2 years of delays, while a £12 million fully funded plan for a stadium ballooned into a £38 million – high risk – mega scheme, producing an additional £8 million bill for taxpayers.

York simply can’t afford this reckless approach to its economy or to the prioritisation of its limited resources.

The scheme should be scrapped before good money joins the hundreds of thousands of pounds already wasted.

Instead the Council should look to sell on the non listed parts of the site to the private sector and negotiate a zero risk option for taxpayers.

That might involve some provision for digital arts but it might also mean residential units in what is a prime site or failing that some retail/hotel use (or a combination of all of these).

The resultant capital receipt could then be used to maintain the Guildhall Listed buildings to a good standard, to ensure its continuing role as the civic centre of the City and provide a fulcrum point valued by all residents not just the techno elite.