Yorkshire and Humber MEP Rebecca Taylor has backed calls to reverse cuts to salt bins and gritting routes in York after 1,000 residents signed a petition against the proposals. 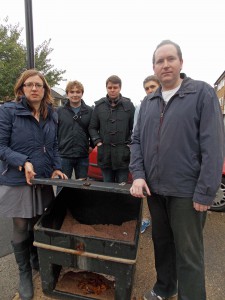 The Labour run City of York Council plans to cut two-thirds of salt bins and remove nearly 30 miles of roads from priority gritting routes, including on bus routes.

Lib Dem Councillors Ann Reid, Nigel Ayre and Keith Aspden have ‘called-in’ the decision for further review and the proposals are now set to be reconsidered at a special meeting of York’s Corporate and Scrutiny Management Committee later today.

The plans have met with fierce opposition from residents and Kingsway Area Residents’ Association recently said that the cuts could see elderly and disabled people trapped in their homes this winter.

Speaking on a visit to Fulford at the weekend Rebecca Taylor, Lib Dem MEP for Yorkshire & the Humber, commented:

“The fact that 1,000 residents have signed the Lib Dem petition shows the strength of local opposition to Labour’s plans. The Council needs to consider the impact the cuts will have on elderly and vulnerable in places like here in Fulford. I would urge the Labour Council to listen to local residents and reconsider their plans to cut salt bins and gritting routes in York”.

“Local residents in Fulford and Heslington tell me they want the Labour Council to focus on delivering basic frontline services like gritting and salt bins. This is also what the Lib Dem Group has consistently called for including in our motion at last week’s Full Council. However, while Labour is finding money to buy an Arts Barge and increase the pay of senior staff they are still cutting basic services for taxpayers”.

The Lib Dem petition against the plans. It can still be found here: http://yorklibdems.org.uk/en/petition/save-our-salt