Residents accessing a new York web site have questioned the York Councils role in the initiative.

Although available since May, the shop4support site has had little publicity and there is no explanation on the site of the Councils role or the standing of the site. 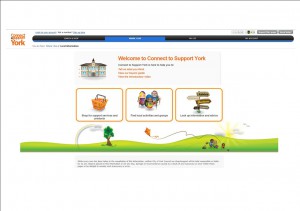 It appears to advertise services for disadvantaged people in the City but representatives of some voluntary organisations say they have only just found out about its existence.

It appears that the site is aimed at personal budget holders – residents who have opted to manage their own social care needs from a budget allocated by the local authority. This is a growing number of people in York where the number of direct payment holders has increased from 99 in 2008 to around 300 today. In addition many elderly people also chose now to arrange their own care.

The web page is clearly marked as being a City of York Council supported initiative, but there is no record of the Council having formally discussed its involvement. No Council contact telephone number is advertised on the site. There is no link to the site from the Council’s own web page.

Many of the services offered involve a payment. Although some of the advertisers are voluntary groups, there are others which appear to have a more commercial background.

Elsewhere on the web site, Councils are being offered the chance to get join the network in return for a payment of “from £45,000”.

Questions about the Councils involvement with the web site are likely to be asked at the next Council meeting which is taking place on 10th October. 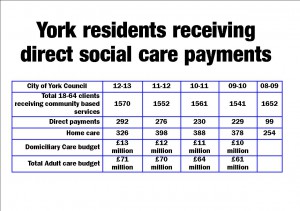