12 months after a Freedom of Information request was lodged with the York Council, officials have finally revealed the number of “All York” bus tickets that have been sold.

This was the product launched in July 2012 which allowed passengers to purchase one £5 day ticket which could be used on any bus operating in the York area.

When launched, the Council said that it would spend £20,000 of taxpayer’s money advertising the availability of the ticket.

They would also use administrative staff to allocate, the fare revenue collected, to individual bus operators. 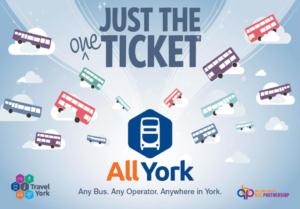 It was this taxpayer’s subsidy which prompted a request that the number of tickets sold be publicised. The Council declined to do so saying that it was “commercially confidential”.

It took an appeal to the Information Commissioner to force the release of the information.

In March the minutes of a Council bus consultative meeting had suggested that “All York” ticket sales were around “10,000 a quarter”.

In reality it turns out that sales are only about ¼ of that figure.

The total number of tickets sold stands at 10,425 which represents a tiny proportion of the 16 million local bus journeys made each year.

It looks like taxpayers have subsidised each ticket to the tune of £2.

Many people thought that the Council should have prioritised the introduction of a smartcard which would allow cross operator ticketing at negligible cost.

Steve Galloway – who first raised the issue – says, “There is nothing contained in the figures that threatens the commercial interests of bus companies. The very low sales do suggest though that the Council miscalculated very badly the number or passengers who would take advantage of a scheme which has proved to be an unnecessary burden on taxpayers.

I hope in future that the Council will be more open with bus users about service information.

They have been withholding facts about bus service reliability for over a year.