Interesting idea from TransDev in Harrogate 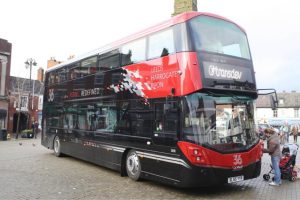 TransDev was experiencing capacity issues in the morning peak on its flagship 36 service between Ripon and Harrogate. It was as a result of a large number of young people travelling to school in Harrogate on the 36, creating overcrowding problems. Over a two-week period 70 parents said they would be willing to pay for their children to use a dedicated door-to-door service and committed to buying season tickets that not only include travel on this dedicated school bus, but the rest of the Harrogate bus network too. As more and more parents came onboard the overall cost to all reduced.

The operator’s school bus fleet vehicles are typically parked up outside the traditional travel to school times. A wish to fully utilise these assets has led to the creation of the VAMOOZ app which will be launched in the coming months.

VAMOOZ will see Transdev Blazefield launch trips to destinations that are currently unserved by its conventional bus network. These destinations could include places like shopping centres, such as Meadowhall near Sheffield and the Trafford Centre outside Manchester, and trips to sporting events, concerts and music festivals too, as well as potentially more traditional visits to towns and cities of interest across the north of England.

VAMOOZ app users will browse the range of destinations on offer or, alternatively, make a suggestion for a trip of their own choosing. They will then commit to travel on that trip at the price offered by the app but uniquely this price will reduce as more and more users commit to travel.

Key to helping stimulate that demand is that users making a commitment will be invited to share their travel plans with friends on social media and by email in a bid to encourage them to travel too. As more and more people commit, the lower the price becomes to all.

Read a fuller article on this idea by clicking here