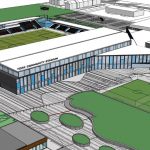 The Council has announced that the charge for parking at Monks Cross will increase from £5 to £10. The proposal comes shortly before the new Community Stadium and facilities like the IMAX cinema are scheduled to open in the summer.

A parking charge of £10 would be amongst the highest faced by supporters of both football and rugby in the UK. In the lower leagues, charges are usually less than £5. (Higher charges can apply to car parks close to Premier league grounds).

Many local supporters are expected to use the reverse park and ride service to Monks Cross. Fares are £3-20 return to the City centre.

Free parking at the nearby Vanguard (John Lewis, M & S etc)car park is restricted to a maximum of 4 hours. Camera enforcement of the restrictions is in operation. Trip Advisor is rife with complaints about fines of £80 being levied for over stayers.